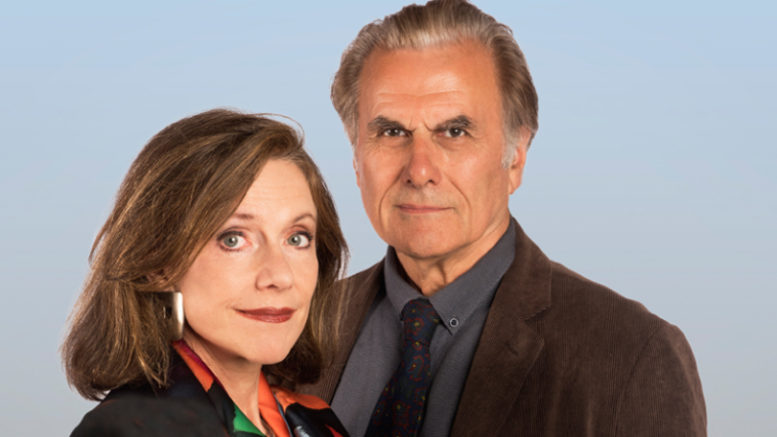 Donald Trump is doing the best he can. That may or may not be the case, of course, but it is how Tom Kempinski concludes his notes for the programme to his play, Duet for One, which is at Chichester Festival Theatre.

Quite what the most powerful man on the planet has to do with a shrink and his patient trying to unravel exactly why the latter is, intermittently, considering suicide isn’t obvious. Or is it?

Well, that probably depends on your own disposition. But few can argue that the Trump presidency isn’t thought-provoking; just like this production, which sees Stephanie Abrahams (Belinda Lang) as a former concert violinist coming to terms with developing multiple sclerosis.

The debilitating disease wrecks her career and impacts massively on her life (she’s married to a renowned musical maestro and has no children) and psychological well-being, as you might expect.

That’s where Dr Feldmann (Oliver Cotton) comes in; for it is he who has been asked to try to get to the bottom of his patient’s mental ills.

What unfolds is a series of sessions on the couch (or in the wheelchair in this case), as the two characters go head to head in fearless and often frank discussions (cue colourful vernacular), in which the good doctor pushes Stephanie’s buttons as he tries to delve in to both her conscious and subconscious.

A Duet for One, which is directed by Robin Lefevre, examines how hope can usually rely on resolve — from whatever well it is drawn; a formidable combination when allied to the natural resources of the human spirit.

Belinda Lang’s acerbic outbursts are unforgettable, while Oliver Cotton’s deadpan responses provide the perfect foil for his often maniacal patient as she pours out her angst-ridden woes.

The play has long been linked to the assertion that Kempinski based it on the life of great cellist Jacqueline du Pre, who suffered from MS. But he is resolute in his denial that this is the case. “Fake news,” he defiantly declares. That brings us back to Trump. Perhaps time to call our good doctor?