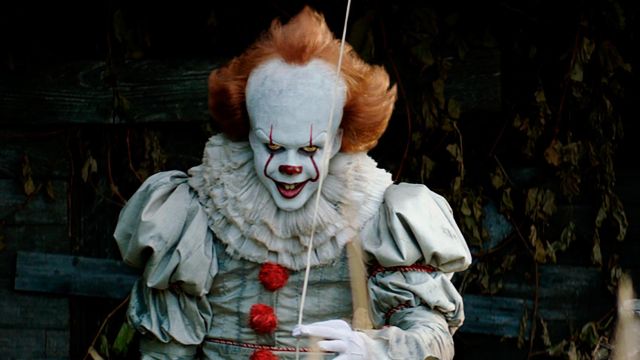 Based on legendary storyteller Stephen King’s 1986 novel of the same name, IT (15) centres on a group of kids, dubbed The Losers Club, who must band together in order to fight a demonic presence that feeds on children, taking the form of whatever they fear most.

Lets talk about the best part of this film, the kids. The casting was absolutely spot on, all the kid actors were phenomenal in their performances, expertly capturing what it is like to be a kid, the dialogue they had with each other felt real. A problem with some horror movies, the ones that predominately feature child actors, is that they talk like adults. Whereas, in this adaptation of the classic novel, the conversations they have with each other are what kids, of that age, would be talking about, swearing, mum jokes and witty banter, all made for some very believable chemistry between them all. I will even go as far to say that there was a certain Goonies vibe to their relationships which was great.

The stand out characters, for me, were Richie (Finn Wolfhard), great name by the way, and Eddie (Jack Dylan Grazer). The jokes they exchange, at each others expense, were hilarious, repeatedly making me laugh despite the terrifying situations they may be in. Richie, Eddie, Bill (Jaeden Lieberher), and Bev (Sophia Lillis) kind of took centre stage, meaning that some of the other “Losers” faded into the background in some parts, this takes nothing away from their performances, which were all solid. I imagine its hard to juggle seven stars, as well as the villain which I will get onto in a second, and still have lots for them to do.

Step right up kids for the main attraction, Pennywise The Dancing Clown, played to absolute perfection by Bill Skarsgard. I’m not going to compare him to Tim Curry’s performance because he deserves all the praise for his chilling take on the character. He was undeniably creepy, the make up and overall design was like nothing I’ve ever seen from a clown in a horror film, he has single handedly made clowns scary again so good job Bill, people won’t sleep for weeks. Anytime he was on screen I had a big grin on my face, even when he’s eating children; what does that say about me?

A lot more of the book content was prominent in this adaptation, many of Pennywise’s forms got a significant upgrade in this version, all even creepier than the last. It was great to see the Leper make it onto the big screen, as it was absent from the 1990 TV mini-series. I suppose with a bigger movie budget, as opposed to the TV budget, it allowed for more room to include the more violent, and hard to watch moments from the book.

Finally, the pacing was great, it felt like the film wouldn’t let up in terms of scares. Even in the downtime, between Pennywise appearances, the storyline was so interesting and fun that I was never bored, just constantly entertained which is a hard task for a two hour plus horror film.

Overall, I will say IT is the best horror film of the year, and I can’t imagine anything is going to top it as we near the end of 2017. Excellent performances from the Losers, an incredible villain, a great story and a flurry of comedic moments scattered throughout, all made for the best Stephen King adaptation in years. Remind me never to get into a rock fight with The Losers Club.