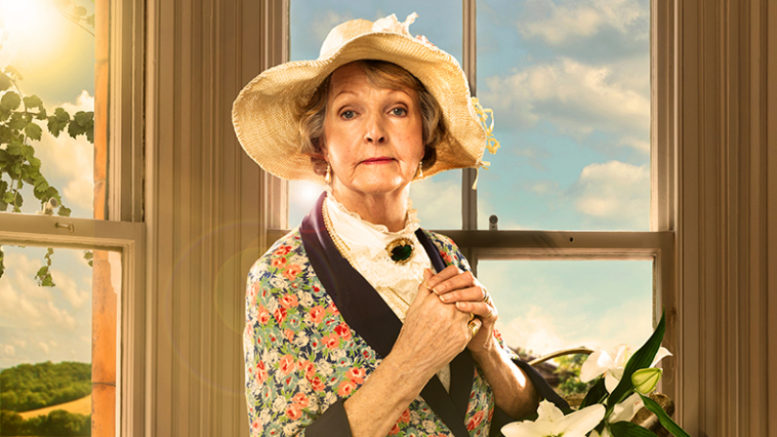 All is rosy in the garden for beloved Penelope Keith on the evidence of her wonderful performance in The Chalk Garden at Chichester Festival Theatre.

Penelope is perhaps most fondly remembered for her role as Margot in TV sitcom The Good Life and there is more than a passing resemblance to her character, Mrs St Maugham, in Enid Bagnold’s play.

The writer is still best known for her 1935 novel National Velvet — and with Penelope Keith blooming brilliantly as the piece’s eccentric matriarch proof is offered that she is one of her profession’s national treasures.

Amidst comical passages bordering on high farce, unconventional Mrs St Maugham needs a hand raising both her lilies and her wayward grand-daughter, Laurel (Emma Curtis). Thus, hired help arrives in the shape of green-fingered though mysterious Miss Madrigal (Amanda Root) after a newspaper advert brings her into the job by way of being the only remaining candidate.

She is soon cultivating not only the garden but a bond with Laurel, who calls her the “boss”. But the inquisitive teenager discovers her governess is hiding a dar past; and a murder conviction no less. Ever-frantic butler, Maitland (Matthew Cottle), persuades her to keep the secret — for the time being.

In amongst all of the chaos, Laurel’s absent mother Olivia (Caroline Harper) arrives to claim her daughter back, a move which only adds to the increasing drama. Throw in an ancient judge (Oliva Ford Davies) whose arrival provides a chance more hilarious quips and a coincidence with shattering consequences.

The chalky soil in the Sussex garden of our central figure conspires to constantly thwart those who would bid to nurture vibrant petals but it certainly provides fertile ground for Penelope Keith to blossom, and she doesn’t disappoint.

THE CHALK GARDEN
By Enid Bagnold
Until 16 June
FESTIVAL THEATRE
TICKETS
Price: from £10

The lure of King Lear! McKellen and Co. switch to West End after success at Chichester Festival Theatre