Chichester man Ryan Lock killed himself while fighting in Syria to avoid being taken hostage by Islamic State, it has emerged.

Former chef Lock, aged 20, told his family he was going on holiday last August, before joining Kurdish forces to do battle with IS.

But he chose to take his own life after engaging the enemy on behalf of Kurdish military force fighting in northern Syria.

Lock, who had no military experience, died following an offensive by anti-IS forces in a bid to retake the northern city of Raaqa, the terrorist group’s stronghold. 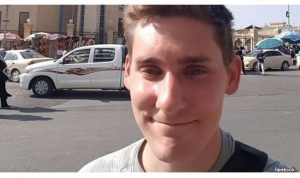 Former chef Lock, who had no previous military experience, joined the campaign after telling his family he was going on holiday to Turkey in August. He wrote: “I’m on my way to Rojava. I lied about going to Turkey. I’m sorry I didn’t tell anyone. I love all of you and I will be back in six months.”

Lock’s father, Jon Plater, has confirmed BBC reports that it appeared he committed suicide. He said: “We did know. It is true – 100 per cent.”

Xirki said in a statement: “We bless the resistance of British martyr Berxwedan Givara for the families of all martyrs and the British people.”

A spokesperson Foreign and Commonwealth Office: “The UK has advised for some time against all travel to Syria. As all UK consular services there are suspended, it is extremely difficult to confirm the status and whereabouts of British Nationals in Syria. Anyone who does travel to these areas, for whatever reason, is putting themselves in considerable danger.”