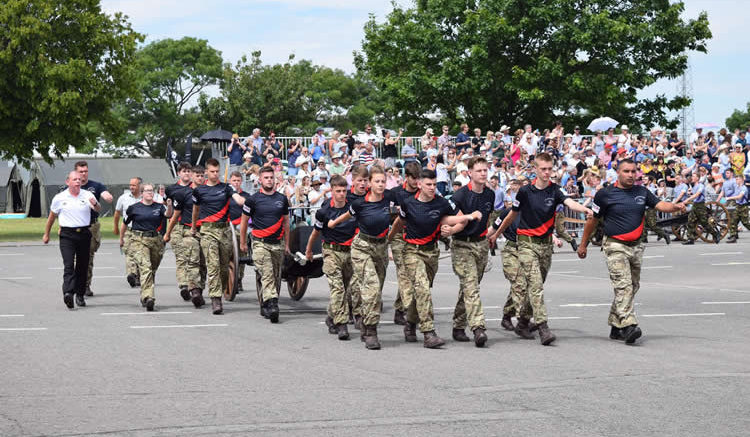 The idea is a simple one; haul a hulking great field gun that weighs the equivalent of a Mini over a distance of 85 meters in the fastest time. And although the premise seems simple enough, to actually compete successfully in the Royal Navy-organised event is anything but!

Yet Chichester College students loved the opportunity of taking part in the annual Junior Leaders’ Field Gun competition – and narrowly missed out on retaining the title at the event, which took place at HMS Collingwood, Fareham earlier this month.

The Chichester outfit, which consisted of students studying sports and public services, were put through their paces for four days as they trained together in the run-up to the challenge. Team Chichester was up against opponents from other colleges, such as Fareham and Itchen, as well as outfits from the armed forces, including HMS Sultan as well as overall winners RAF Cosford.

Scott Young, who was the Chichester skipper (he has just finished his Public Services course), said the entire team enjoyed a really good experience and that, as captain, he couldn’t have hoped for a better effort.

He added that the event brings together people who wouldn’t usually spend time with each other “but we’ve all come together and worked as a team, as a unit – we’ve become like a family. This was my 2nd year, first as team captain and I’m really proud of the team for the way we’ve worked.”

So thrilled was Scott with the experience that, although he won’t be studying at the college next time the event is staged, he really wants to return as a volunteer to mentor the team.

Coming up against 16 teams, the Chichester crew did well to get to the Plate 1 Final, although they couldn’t quite defend the title which they won last time of asking. None the less, Wayne Hodkinson, lecturer in Public Services at the college, said he was very proud of the team that he mentored and trained — citing, especially, the crew’s incredible work rate throughout the week and that they “really rose to the challenge”, adding: “The way they have worked as a team has been brilliant — probably the best I’ve seen Chichester. Field Gun is really tough — physically and mentally. It is hard work but they put everything into the competition, which seems to get tougher every year.”

The standard this year was probably the highest yet, he added, and although Chichester didn’t win there was immense pride to be had by the manner in which they competed. The lecturer said that it is always an honour to be asked to take part in the competition — and he complimented the Royal Navy for a super job organising the event and passed on the team’s gratitude.

Two Chichester crew members who stood out during the five days the team were together were rewarded with awards; Harry Rayment was handed the endeavour award, and Richards Lusis was given the honour of being named Chichester College Field Gunner of the Year.