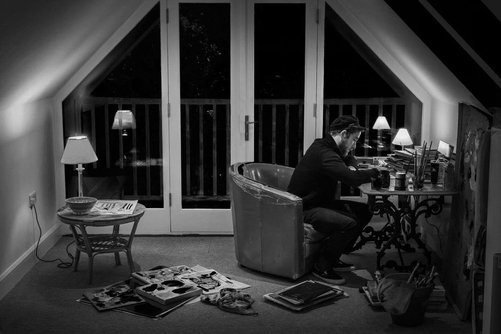 Skateboarding breeds creativity, is my strongly held belief. It is another way of interpreting the world that surrounds us; just like other creative activities such as music, acting, fashion or art.

Throughout history skateboarders have embraced their creativity, which has manifested itself in many areas. Take Jason Lee, a well known face in the skateboarding world who went on to become the creator of the hit TV show My Name is Earl. Then there is Spike Jonze, another big name in both the skateboarding world and the film industry, along with countless artists, photographers and musicians.

Now Chichester has its very own creative force with origins in the city’s skateboarding scene. Jack Penny has always been known for his individual, smooth style on a skateboard. But in more recent years he has also been forging a career in the art world.

Although he has travelled the world and has a client list that spans Europe, Jack is now based in Bosham. His art, much like his skateboarding has its own individual style which is imaginative, full of energy and demands your attention.

Have you always had a passion for art? Tell us a bit about your early experiences with it.

I’ve always been a hands on, visual person. I started leaning towards art very young as the academic side of school was never an environment I thrived in. I was pretty much the poster child of dyslexia, therefore most of my time at school was not a comfortable place for me. A short attention span mixed with the frustration of not doing too well in most academic subjects due to the stagnate class room environment led me to concentrate on the more free and interactive subjects like PE and art where I always felt far more at home.

I was fortunate at secondary school to have had an exceptional art teacher called Mr Saysell. He let me use the art room at break or if I was asked to leave other lessons due to disturbing the class or simply having a nap, the art room door was always open. 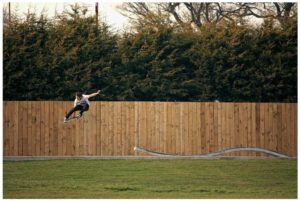 Mr Saysell encouraged me to use my energy in my work and always pushed me to break away from the more academic still life drawing that I was naturally good at. I feel that Mr Saysell’s teaching and encouragement of experimentation has largely impacted the way I work now.

After high school i decided to go into fine art at college where I really developed a strong interest in art as a whole, this was due in large part to my tutor, Sally Taylor, a practising artist who taught me far more than just how to express myself through my work. I learnt how to be open minded upon viewing art, to consider when and where it was created, who by, and what they were portraying.

These things have all become an integral way of thinking for me now, I am a firm believer that even if somebody can execute a good painting that can be full of artistically academic tricks, it doesn’t make them a good artist. For me, there has to be something else behind it, which is how I feel art and skateboarding are similar, there should be more than just tricks.

Talk us through your creative process; do you have any specific routines?

At any given time I can have a multitude of paintings underway, at the moment I’m working on a few larger canvases that can take anything between a week and six months to complete. Due to the nature of how I work, I could be moments away from solving an issue in a painting and then decide to strip it back and go in a completely different direction. 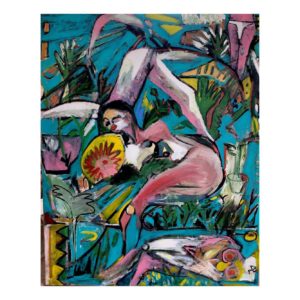 This is always a hard decision to make in the moment because I could be losing six months worth of work but I have come to accept that this is the best way to work for me as making brash decisions can lead to the most interesting pieces. In the few times I might not have a painting or project on the go, I will refer to books, magazines or photos that I have taken as a form of inspiration to build something from. I’m currently working in a particularly intuitive manner, I am enjoying letting the painting develop naturally and merely guiding it.

What do you look too for inspiration? Are there specific people or places that spark your imagination?

I take inspiration from all directions, having been in a studio surrounded by industrial estates to now working in what could be loosely described as a tree house, the difference in my surroundings has definitely shown itself in my more recent work. I distinctly remember the first artist that caught my attention was Ralph Steadman.

I was around 13 and at my friend Sam Bailey’s house and he always had some cool stuff for me to rummage through. I found a book of Steadman’s illustrations and I remember being immediately interested. At the time I didn’t know what it was that attracted me to his work but having grown up I came to the conclusion it’s the way that his work has such an effect of bursting off the paper, his work felt, in a way, dangerous. Over the last 15 years my taste has definitely gone through a lot of changes, but I still find myself drawn to work that exudes energy and experimentation.

Skateboarding has had its place in the art world throughout history, why do you think the two worlds are so entwined?

Skateboarding and creativity go hand in hand for me. if you skate, you’re going to be exposed to art, whether it be fashion, music, photography etc. This has always been the case for myself, most skateboarders have creative interests that have stemmed from skateboarding. Skateboarding has defiantly impacted the way in which I work like how to view things from different angles and how long it takes to become good at something.

Who are your top five skateboarding artists?

Mark Gonzalez. I love the work of photographer Craig R. Stecyk, the works and pure creative vision of Ed Templeton, the board designs of Jim Phillips and the madness of Neck Face’s work.

What advice do you wish someone had give you coming up as an artist?

That making of art is only a part of being an artist. There’s a lot going on in the back ground you got to learn quickly!

What have you got coming up in the future, anything for us to look out for?

Artist Lindsey Marie White and I are exhibitiing at AKA Gallery. We came up with the concept of working to an intense time frame to see what comes out of the week together. Well aware that putting an exhibition of work together takes time but we are very interested to see what happens when we put ourselves in a new, uncomfortable and restricting time frame.

I have a residency coming up later this month in Switzerland where I will be developing four or five paintings for an auction that will take place December this year. Later on this year in September I will be part of a large group show in Copenhagen, after September there are lots of ideas for plans but nothing set in stone just yet.