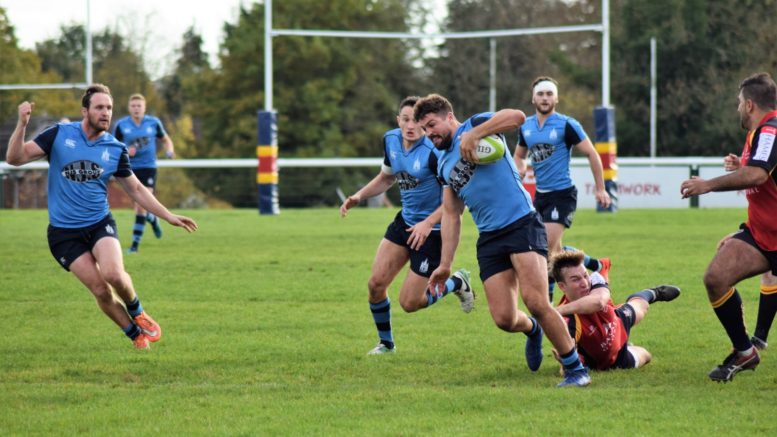 Aaron Davies and Harry Seaman dotted down twice each as Chichester overcame Chobham in a 39-29 victory. This is the fourth consecutive away win for Chi in what was a mixed performance in this London and SE Division match.

The Oaklands Park outfit stay in third place following this win, level on points with second-place CS Rugby and only four points behind leaders Medway.

Chi started strong with Henry Anscombe kicking to the corner, the resultant lineout and drive allowed Seaman to open the scoring. The hosts replied immediately with a penalty.

After a stellar debut last week, young winger Cameron Hopkins was at it again. He scored Chi’s second of the day after some solid passing across the front of the posts. Chobham responded again after gathering the ball 30yds out and driving across to score.

Chichester attacked well with good ball handling and passing, leading to another try scored just right of the posts, this time by Chris Johnson, with Anscombe adding the extras. Davies then scored his first of the day after some good combination play.

Just before the break another lineout and controlled drive sent Dane Gingell over the line to give Chi a 29-10 lead going into the half.

Kyran Richter broke clear inside the 22 and passed to Davies who went over the line for his second of the day. A sloppy pass was intercepted by Chobham who punished Chi for their mistake. They continued to press and added their third try of the game following a five-metre scrum.

A lineout drive near the end saw Seaman score again but the last score of the game went to Chobham, whose winger sprinted 50 metres to score.