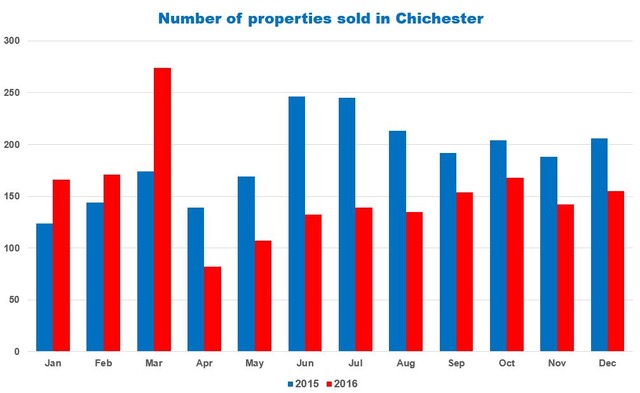 I was chatting with a landlord in Chichester last week who had decided to sell their rental property but was struggling to do so. He was therefore considering re-letting the property rather than holding out for a seller who might not come along, having waited several months already. I told him if he really wanted to sell, it might be best to remain patient a little while longer as April-May is typically a busy time amongst estate agents in regards to selling property.

When I got back to my office this got me thinking…which month is the busiest for the estate agents in Chichester? I thought if I looked up the number of property sales in Chichester in each month of last year, I might be able to find an answer.

So March saw far more property sales in Chichester than in any other month in 2016. BUT this is something of a red herring, as 2016 was quite unique due to the government’s meddling. A 3% stamp duty levy that came in on 1st April 2016 for landlords and second home owners, meant there was a huge increase in the number of transactions getting pushed through in March (and January & February) to avoid this additional cost.

Because of this, I thought it best to go back another year to 2015 (a year that wasn’t distorted by government policy), where I found the following number of property sales in Chichester for each month of the year:

We can see that the number of sales were far more evenly spread throughout 2015 than in 2016. The comparison between the two years also highlights what a drastic affect the stamp duty changes have had on Chichester’s property market, as every month after they came into force has seen fewer properties sold in Chichester than in the same month the year before.

Back to my original question though, about which month is busiest in Chichester’s property market, and it would seem the peak in property sales in 2015 occurred in June and July, where 246 and 245 properties were sold in Chichester respectively.

Bear in mind though that these figures (from Land Registry) are when a property sale is completed, rather than when it is first agreed between buyer and seller. With the legal process taking at least a couple of months, we can conclude that the majority of sales are indeed agreed in April and May.