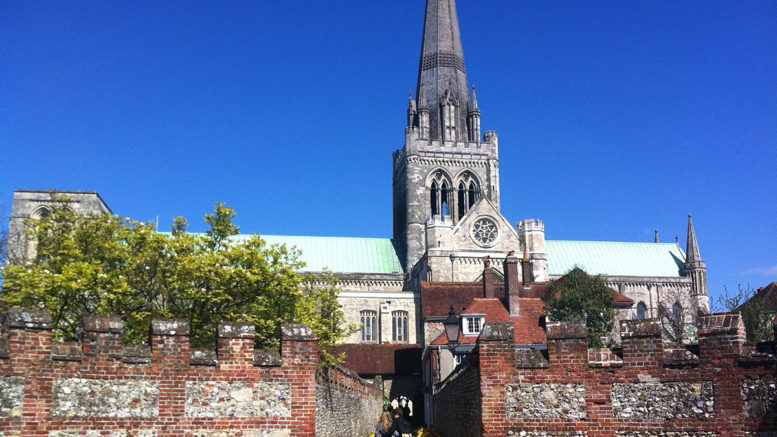 Councillors got more than they bargained for when they met today (Friday) to set next year’s budget at West Sussex County Hall in Chichester in what has been described as a Valentine’s Day climate protest.

Members of Extinction Rebellion numbering at around 100 (members from Worthing Climate Action Network and South East Climate Alliance were also in attendance) gathered in the city to protest as the councillors arrived to go through their figures. They had gathered from throughout to call for the West Sussex pension fund to divest from fossil fuels and, in turn, demand action on climate change.

Extinction Rebellion is a global environmental movement that aims to use “non-violent civil disobedience” to try to persuade government action to avoid “tipping points in the climate system, biodiversity loss, and the risk of social and ecological collapse”.

After staging their protest at the city hall in West Street, protestors wandered through Chichester blowing whistles and banging drums in a tribal fashion to alert onlookers to their cause. Mum of two Louise Ramsey, who is aged 39, from nearby Emsworth, said the colourful protestors brought some excitement to what was, in her words, an otherwise mundane Friday. But, she argued, despite their actions, she doubted that it would have any impact on the bigwigs’ decisions.

“I absolutely defend their right to protest and the fact that they did so in a peaceable manner is just excellent. But that said, I’m not so sure that they will make a difference. Speaking truth too power is admirable but there always seems to be a way for those wielding that power to bypass the will of the people. But I did enjoy the drumming and the colour they brought to the city, it made for some excitement to an otherwise grey day.”

Protestor Adam Knight, 24, travelled from Brighton to make his voice heard. He said that the planned protest was about more than simply calling for the pension fund to divest from fossil fuels. He said:

“We’ve had a good day and engaged with many people over many issues and especially the matters in hand. The good people of Chichester have been very open to debate — which, of course, is always very healthy — and I certainly believe that a good few people will go away from today with a new perception of what we are talking about.

“The simple truth of the matter is that we face an unprecedented global emergency. Our life on Earth is in crisis — scientists agree that we have entered a period of crucial climate breakdown, and we are in the midst of a mass extinction of our own making. That is our battle cry!”