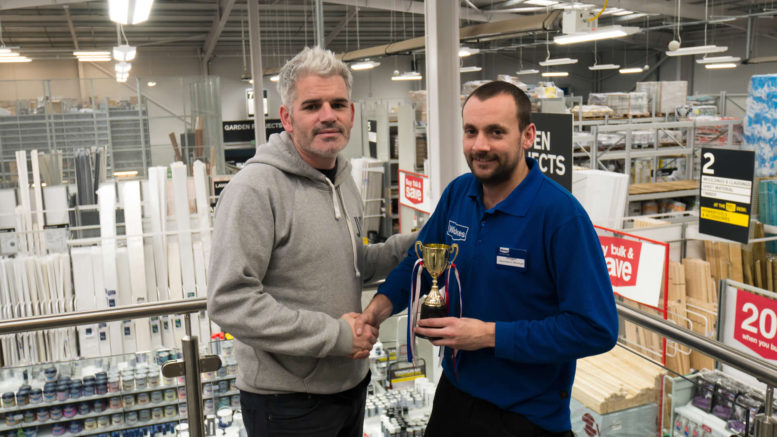 Roger, who is operations manager at the Barnfield Road store, is raising a team to take on Falbros Media Group (FMG)  — owners of Chichester News — to contest the ChiFi Cup, with charitable donations from the event going to Stonepillow, the homeless charity.

The six-a-side match takes place at Chichester College on Wednesday December 20, with a 7.30 kick-off, and is being backed by the businessmen behind ChiFi, a new, free WiFi service in the city’s North Street.

Roger says he is looking forward to dusting off his boots to play in the game after pulling a hamstring the last time he played football in the summer.

He said: “It’s a great cause and we are delighted to be taking part. It should be a whole lot of fun and it’s for charity too, which is great.

“Here at Wickes we are big football fans and had a very successful ‘Kits for KIds’ campaign recently which provided kits to 72 teams throughout the country.

“We do as much as we can for charitable causes and we know only too well that the homeless need as much help as they can get, especially at this time of year when it is freezing.”

FMG’s commercial director Ryan Ewen (pictured with Roger Knight of Wickes) teamed up with Henry Brown of Blaze Wireless to launch the ChiFi service to help frustrated mobile phone users who have struggled to get a signal. They have plans to expand the service throughout the city.

Now they are sponsoring the ChiFi Cup football match and Mr Ewen is hopeful of making a significant donation to Stonepillow as a result.

He said: “ChiFi is all about connecting the community and within out community homelessness is an issue. Hopefully, we can raise some money and awareness for the brilliant work done by Stonepillow. We’re grateful to all at Wickes and others who have helped out, too. And a big thanks also to Ben at Game, Set and Match for helping out with the kits.”