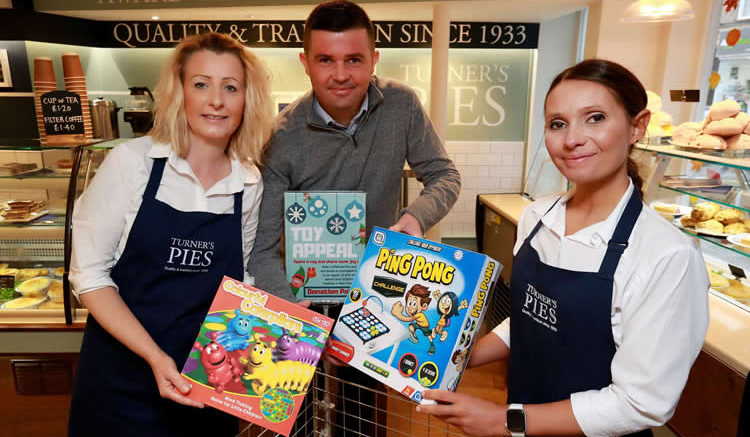 Kind-hearted customers at the south’s favourite pie shops are being urged to donate toys ahead of the festive celebrations to help spread some Christmas joy amongst poorly children.

Bosses at award-winning Turner’s Pies have launched a campaign to try to bring some cheer to youngsters who will spend some of the yuletide holiday on a hospital ward.

The new toys and gifts for girls and boys – which need to be unwrapped — will be collected in Christmas crates installed at the pie-makers’ four stores throughout West Sussex — in Broadwater (Worthing), Chichester, Bognor Regis and Rustington — and will be handed over to the children on Bluefin Children’s Ward in Worthing hospital.

Turner’s Pies, voted class champion with their steak and mature cheddar pie at this year’s British Pie Awards, has teamed up with Love Your Hospital, Western Sussex Hospitals NHS Trust’s fundraising arm, for the charitable drive.

And Turner’s Pies senior manager Joe Turner was on hand to kick things off at the campaign launch ceremony, alongside Mandy Norsworthy, left, and Lucy Ledwith, when he accepted the first donations from caring customers. He said:

“As a company we are super keen to play as big a role as we can in the communities we serve. We’ve admired for some time the fantastic work that Love Your Hospital undertake and we are delighted that they have accepted us as a partner for this campaign and are right behind our efforts to try to bring some joy to deserving children at Christmas.

“We’ve placed Christmas collection crates in all our shops as of Monday, October 21 and would love to fill them to the brim. So, if you have any toys that you might want to donate we’d love to see you. Once we’ve collected them we’ll ask Father Christmas to make a special delivery to the ward and try to spread some festive smiles amongst the children and staff.”

Love Your Hospital is the dedicated charity for the three hospitals that make up Western Sussex Hospitals NHS Foundation Trust comprising St Richard’s Hospital in Chichester, Worthing Hospital and Southlands Hospital in Shoreham.

They exist to fund the very latest equipment, enable staff to provide outstanding healthcare and ensure patients have access to the best and most modern facilities.

John Price, the charity’s corporate company fundraiser, says he can’t wait to see all the goodies light up the faces of the children as Christmas nears. He added:

“We’re delighted to team up with Turner’s Pies for this campaign, which will make a huge difference to the experiences of children and their families who find themselves in hospital over Christmas.”

Meanwhile, Phil Turner, managing director of Turner’s Pies, said the business was gearing up to make the campaign as successful as possible. He said:

“Our customers are lovely people and we know they want to support us in helping with Love Your Hospital and all the tremendous work they do. We’re looking forward to a successful toy-collecting spell!”