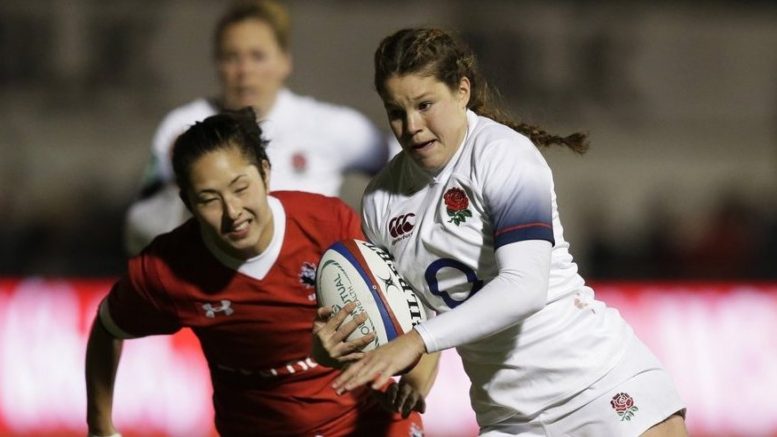 Jess Breach, the former Chichester RFC starlet, made a name for herself with a stunning debut match for the senior England rugby union team, where she bagged six tries in an extraordinary performance.

She started her career at the Oaklands Park outfit before she moved to Aylesford Bulls. This then became Harlequin Ladies, where she played for England Under 18s and 20s.

The talented winger was called up to the senior side for their first match of the Test series against Canada at Allianz Park, London.

Quizzed about her stellar performance, Breach said: “Yeah, great, I mean it was an amazing experience, the game was great it was flowing.

“The Canada game was a great game but to get six tries, I was just over the moon”.

Her international debut for the senior team, also known as the Red Roses, resulted in a dream performance for the 20-year-old Harlequins wing. She dotted down three times in each half in England’s thumping 79-5 victory.

Social media was full of praise for the student, who, as well as playing rugby is also studying Sport and Exercise Science at the University of Chichester.

Harlequins Ladies approved of her performance after scoring her sixth try of the night. They said: “Can you get a better debut? Jess Breach is UNSTOPPABLE tonight.”

Phil Smith, Head of Games Services at British Paralympic Association, had this to say: “Unbelievable! She’s been unstoppable for Harlequins Women so far this season so I think it’s fair to say Jess Breach is the real deal! England Rugby have got a superstar on their hands.”

James Field said on Twitter: “Really enjoyed showing my 3-year-old daughter the highlights this morning and seeing her excitement that Jess Breach is a chi girl too. Role Model.”