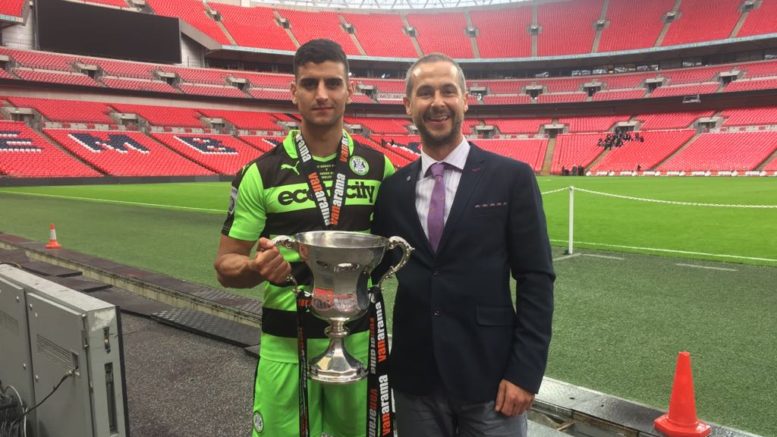 Former Chichester College Omar Bugiel has realised his dream of making it as a professional in league football after his side won a dream Wembley showdown to gain promotion.

And Bognor Regis Town coach Darin Kilpatrick, an influential figure in college football, was on hand to help his former protege celebrate the success.

Bugiel came to Chichester College seven years ago, moving from Germany to study English then passing his football coaching qualifications. He played for the college then for Worthing before making the move that would prove so pivotal. 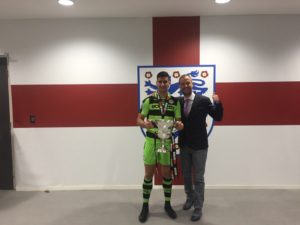 Before the victory, Bugiel, who was an unused substitute on the day which attracted 18,801 supporters, told the college’s website: “It’s been a lot to take in but I’m really enjoying it. It’s a new challenge for me to rise to and I’m going to be working my socks off to prove myself.

“It all started here for me really. I owe a lot to Dabba (Kilpartrick), Dave Daniel and Paul Hinshelwood – they kept me going when I had a bad injury a few years ago.

“I don’t think I would be where I am, if it hadn’t been for them or if I hadn’t come to Chichester. It’s been a long road to get to where I am, I’ve come up the hard way, through Sunday leagues, county leagues and grass root football to Worthing and now Forest Green. It definitely makes you appreciate it more.”

To help him enjoy his success, the college posted these pictures to their Twitter feed.