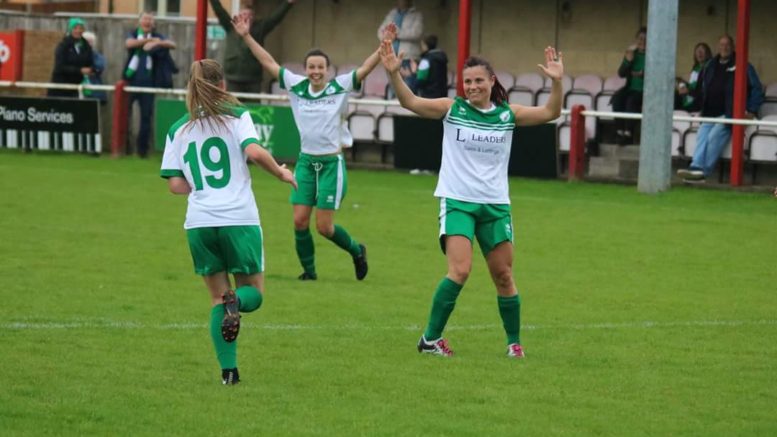 Charley Wilson-Blakely can’t stop scoring! She added another three to her tally for the season in Chichester City Ladies’ 7-4 win over Swindon Town Ladies. There were goals-a-plenty in this thrilling FAWPL Southern Division contest with the hosts almost making an impressive comeback.

Additional goals from Cherelle Khassal (2) and one each from Hollie Wride and Alex Collingham ensured the visitors provided an exciting match at Cinder Lane.

This great win will boost the team’s spirits for when they make the away trip to Lewes this weekend. Chi will be looking for payback after defeat in the last meeting between the two sides.

Chichester started strongly, passing the ball well with Ellis Bloomfield bossing the midfield. For the travelling fans, the mutual thought was that a goal was imminent.

The fans didn’t have to wait long as a beautifully delivered corner met the head of Wilson-Blakely, who rose well and nodded home. The visitors lead was then doubled when Wride met another well-delivered corner and finished comfortably.

Wilson-Blakely doubled her tally for the day with a fabulous strike from distance that flew past the goalie into the roof of the net. Khassal then added a fourth with an effortless finish past the keeper.

The hosts managed to get a goal back before the half. Chi responded immediately, following the restart, with Wilson-Blakely completing her hat-trick with a fine finish at the near post.

A huge deflection, lucky ricochet and a dodgy penalty decision allowed the home side to reduce Chi’s lead to just one and send them into panic mode.

Chi stayed composed and halted a potential comeback with goals from 16-year-old sub Collingham as well as Khassal, who well and truly finished the hosts off in fine fashion.

Meanwhile, the development team’s match against Meridian was postponed.

The U13s Whites lost 8-1 to Mile Oak Wanderers. The U13s Greens won 4-0 away to Shoreham and Adure, with Lucy Spencer, Molly Stoddart, Evie Clark, and Ellie Jeffkins getting the goals.