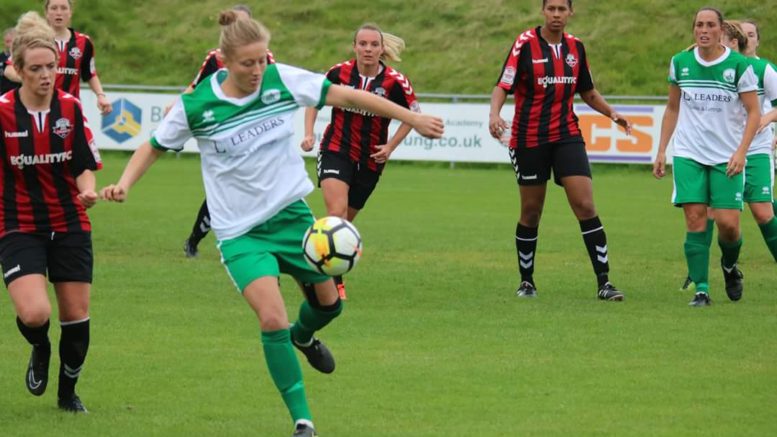 Charley Wilson-Blakely was at it again in front of goal, netting two goals in Chichester City Ladies’ frustrating 2-2 draw with second-place Lewes FC Women yesterday. But the ace goal-getter’s game ended on a stretcher when she suffered an ankle injury.

The in-form striker’s goals weren’t enough as the home side clawed their way back in this FAWPL Southern Division match.

City now look to their next fixture when they host rivals Portsmouth on Wednesday night. The last time they met resulted in a couple of late goals securing a draw for Pompey. Both sides will be hoping a clear winner will be established this time.

An early scare for the visitors saw Lewes through on goal only to be denied by the woodwork after a chipped attempt. Emma Alexandra made sure the score stayed level with an effective clearance.

It was City who broke the deadlock when Wilson-Blakely reacted quickly after a crossbar-rattling shot fell to her feet, and she tucked the ball away giving the visitors the lead.

Their lead was then doubled by the red-hot Wilson-Blakely, who again was first to react after Faye Baker’s save found the feet of the City forward who slotted home comfortably.

Chichester’s lead was cut short when the home side levelled the playing field in quick succession. Both goals coming from corners, a header and a driven rebound meant the sides headed into half time at 2-2.

Despite both teams creating plenty of chances, neither side were able to edge in front. Things got worse for the visitors when Wilson-Blakey was take off on a stretcher off with an ankle injury.