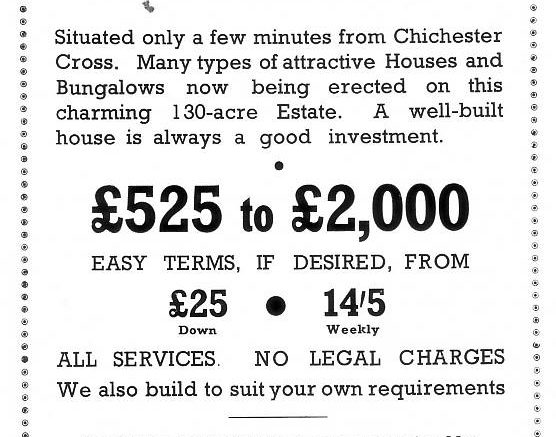 Someone from the excellent Flashback — Chichester Facebook group posted an advert recently whereby you could buy a house in Parklands for just £525. Unfortunately, it was from the Chichester Guide…in 1936!

Still, it offered a fascinating insight into Chichester’s past as Parklands was being built, with the advert promising “many types of attractive Houses and Bungalows on this charming 130-acre Estate”.

Prices ranged between £525 and £2,000 with “easy terms” from £25 down and just 14 shillings 5 pence to pay each week. It’s interesting to note that a £25 deposit on that £525 house would mean the buyer stumping up less than 5% of the purchase price; so maybe overly-zealous lending hasn’t ballooned as much as we’ve been led to believe?

What is clear though is how prices have rocketed in Chichester. The cheapest house in Parklands today (a two-bedroom bungalow) is marketed for £289,950, suggesting that £525 starter home from 1936 has gone up in value around 55,000% since it was first built some 80 years ago.

There were some great anecdotes on the comments section of the Facebook group, looking back at what people’s parents and grandparents had paid for properties in Parklands compared to what the house was worth now. It was noted by some though that affordability for many back then was still out of reach due to lower wages.

I do wonder what the adverts will say when the nearby Whitehouse Farm development begins construction. I’m afraid for today’s generation those “easy terms” won’t be so simple to come by, whilst it’ll take far more than a few month’s income to cover the deposit, even on the “affordable ” housing.

This does all raise an opportunity for many homeowners to release equity from their home, perhaps investing it in a buy-to-let property. Catering for the rising demand in rental properties as rising house prices leads to more people renting is still likely to be a sensible investment in the long-term.