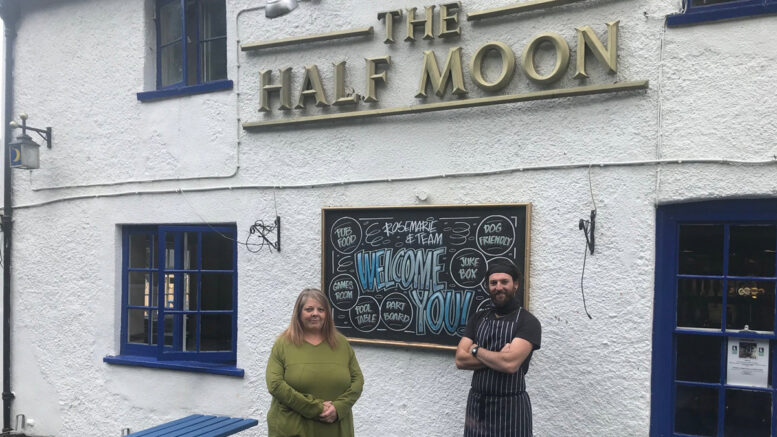 There will be ghostly goings-on a plenty come Halloween tomorrow. Spooky fun will be had by families throughout the land, albeit probably scaled down from what we would refer to as normal times; the pandemic has had an impact on the way we live our lives and Halloween, and by extension the trick or treat custom adopted from our American cousins, will also be muted.

But in between all the terrifying japes carried out by those dressed in fancy dress get-ups, there is a more sinister issue bothering the staff at an historic pub in Midhurst, just an ear-piercing shriek from Chichester.

Rosemarie Carter, landlady at the 19th Century Half Moon Inn, in Petersfield Road, is “absolutely convinced” that the pub is haunted. And she is becoming increasingly convinced that one sneaky spectre in particular follows her late at night when she locks up for the day.

“This place is definitely haunted, no doubt about it. I’ve spoken to many old customers who have told me tales of phantoms and ghosts from yesteryear and have always put them down to perhaps them enjoying one or two too many drinks being consumed!

“I’ve always been aware of unusual things, like objects moving and a strange feeling in the air. But more recently I am convinced a shadowy figure, a lady with a lamp, is following me at night. It gives me the shivers just thinking about it. The air goes cold and I hear a swish of a frock and see what I think is a glimmer of light. It’s all very sudden and very quick. But I can tell you now, it is very scary!”

The venue’s head chef, Sam Laparle, is also wary late at night when he is cleaning down his kitchen following a bristling day’s trade at the highly-rated Half Moon Inn restaurant. Experienced Sam has recently been recruited to head up the pub’s restaurant offerings and he discovered in no time at all that the building was eerie.

As he was preparing for Halloween for the pub’s celebration of all things spooky tomorrow (Saturday), He told the Chichester News:

“Stories do the rounds in kitchens in Chichester, Petworth and Midhurst about old inns being haunted and to be honest I have always thought they were tall tales. But, honestly, there has to be ghosts here. I’ve been aware of a presence while I am in the kitchen late at night and a good few times whenever I turn around I always get the impression that I have been being watched. I’ve not actually seen a ghost, as such, but there is a feeling you get and thinking about it now gives me shivers down my spine.”

Rosemarie has been contacted by a group who want to carry out an overnight ghost hunt and says she is still considering it. In the meantime, she is happy to keep her staff and customers happy — and will always be able to tell them a spooky story or two should they show interest:

“It’s not just Halloween, this place is haunted all year round!”