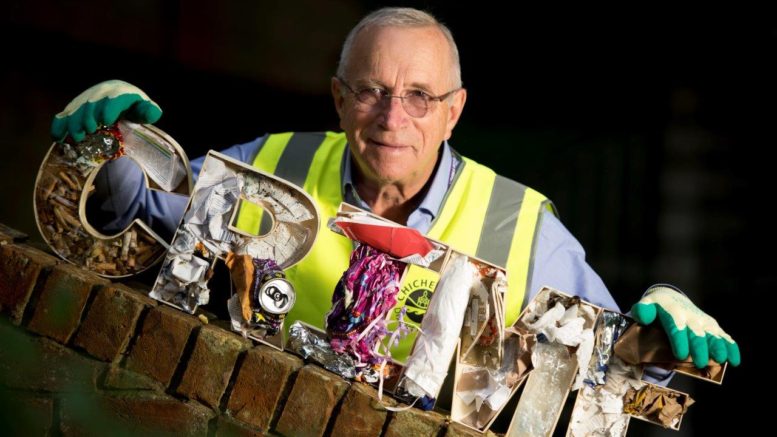 Chichester councillor Roger Barrow has revealed a bid to stub out the habit of discarding cigarette ends has been a huge success.

It’s part of a campaign aimed at reducing littering, dog fouling and fly-tipping is already having a significant impact after just one month, says Chichester District Council.

Cllr Barrow, cabinet member for contract services at Chichester District Council says cleaners have already noticed a reduction in the amount of cigarette ends in the city centre.

He said: “Before the campaign started, we collected 1,221 cigarette ends in Chichester’s city centre within a two hour period on one day. We repeated the exercise recently and it had reduced to 400. Although this isn’t an exact science, this links with the feedback that we’ve had from our cleaning operatives who believe they have started to see a difference.

“The majority of notices have been issued because people are dropping their cigarette ends. It’s important that people recognise that cigarette ends are litter and they take years to decompose and leach toxic chemicals into the soil.

“We have launched this campaign in direct response to the feedback that we have received from our local communities. People don’t want to see our beautiful district ruined by a small minority of people. They want us to take action to protect our environment.

“We have been really encouraged by all of the support we have received to date from businesses; town and parish councils and local residents. We are also excited to launch the second part of our campaign next year, which will encourage residents and organisations to get involved in helping to care for their local area.”

The campaign has been widely promoted across the district. And early next year, the council plans to launch the second part of the campaign, which will encourage businesses, residents and organisations to ‘adopt an area’. It is hoped that this will encourage people to take pride in their local area by getting involved in a range of ways, from reporting problems, through to community clear ups.

Barrow added: “We want to work together with our local communities to make sure that our area remains beautiful and is protected for years to come. We are really excited to go out and work with residents and businesses on this important project.”