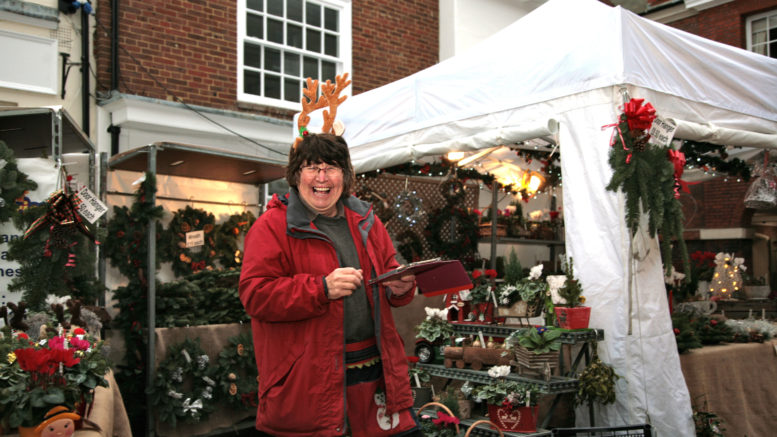 Chichester residents have heaped praise on a WiFi initiative that aims to help people overcome a mobile phone blackspot in the city.

Businessmen Henry Brown and Ryan Ewen switched on their Chi-Fi service on December 1 to help frustrated phone users struggling to retain connectivity with mobile calls and who were unable to connect to the internet.

They have long been frustrated and unhappy with the weak signal in and around North Street. The problems have arisen because many of Chichester’s historic buildings are made of flint and have slate roofs, meaning getting a signal has proved tricky in the past.

Now, thanks to Chi-Fi, people are staying more connected. One businesswoman who has praised the service is Gloria Robinson (pictured), from Tawny Nurseries, in Bell Lane, Birdham, near Chichester.

She used the service this week as she went about her business at her stall in North Street at the Chichester Christmas market. She said: “Someone told me about Chi-Fi and I was delighted and immediately fetched for my iPad to put on some Christmas carols. Well done to those who made this happen.

“It’s a great thing for Chichester. Why shouldn’t a city of such prominence be as connected any other city in the country?”

Mr Ewen, commercial director of Falbros Media Group, owners of Chichester News, teamed up with and Mr Brown, from Blaze Wireless to launch the service. He is delighted with the reception Chi-Fi has received.

He said: “We are increasing the coverage by 70 per cent which will mean full coverage In North Street. The plan is to be city wide by Christmas 2018. Revenues from the project will go into the community to address some fundamental issues that Chichester faces as a community.

“The feedback from businesses has been fantastic and the impact this has for digital opportunities is huge. We had 6,000 people online on 2 December, which was way above our expectations particularly as it was the second day since its launch.”