Andy Kyte and a team of dedicated walkers will embark on the challenge of walking 1,000 miles in 10 days to raise vital money for The Sussex Snowdrop Trust and the Aldingbourne Primary School PTA.

The team, led by Andy, the school’s chairman of the governors, will start their “Mick’s March” challenge of walking 8,600 laps of the Aldingbourne Primary School field on the July 4, with a launch party to send them on their way. The team will walk in relay, with each person walking a staggering 25 miles a day.

A community fun day packed with family friendly entertainment will celebrate their achievement when they finally reach their 1,000-mile target, 10 days later on the July 14.

“This challenge is not just down to the individuals attempting the 1,000 miles. It is an entire community event that is open to other local clubs, groups or individuals who want to join the walkers on their way,” a website set up to showcase the walk explains. “They can use this to complete whatever target distance they wish, have fun dressing up or dancing along the way.”

The challenge has come about as a tribute to the efforts, in the ’80s and ’90s of PC Mick Shone, who ran the Chichester Police Volunteer Cadet Corp (VCC). 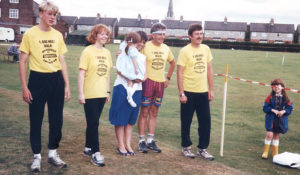 In the summer of 1988 (above), with the aid of the VCC, he organized a 1,000-mile walk at the Chichester Police Station playing fields for the Hayley White Appeal, raising money to pay for a young local girl to have a major liver operation that at the time could only be carried out abroad.

The secondary objective and challenge of this walk was to try and create a new world record and entry into the Guinness Book of Records. The walk involved four of the VCC walking in relay, each covering 25 miles a day for 10 days, hence the total of 1,000 miles. The walk was completed in 241 hours 31 minutes and 34 seconds. This was accepted by Guinness as a new world record and a large sum of money was raised for this appeal.

“Mick created such a strong bond and comradeship between many of the cadets that most have kept in touch ever since. Mick’s influence, guidance and support was pivotal for many of them. They, and many others who knew Mick, were shocked by his death in November 2015.

“To commemorate Mick’s life and many charitable achievements, a former Police college of Mick’s and former VCC leader Andy has got together with many of the former VCC cadets (including one of the original walkers, who is now the local vicar!) who have decided to replicate the challenge and try to equal the 1,000 mile record again, this time raising money for The Sussex Snowdrop Trust which was a cause close to Mick’s heart, and the Aldingbourne Primary School PTA.”