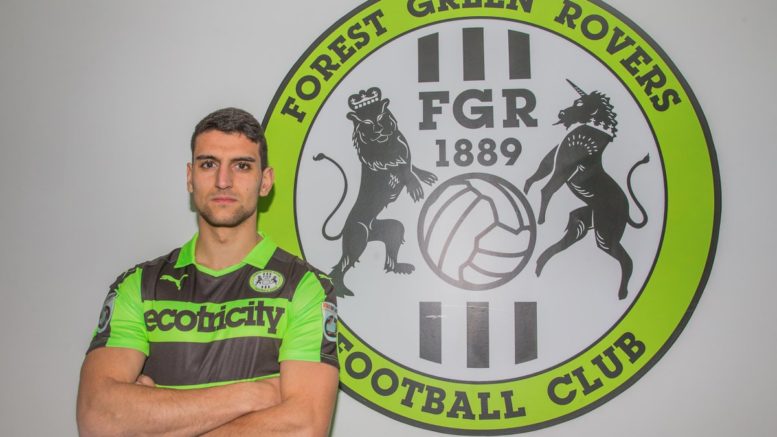 Omar Bugiel honed his soccer skills at Chichester College under the tutelage of Bognor coach Darin Kilpatrick, among others. Now the highly-rated striker is 90 minutes’ away from making it to a dream Wembley appearance then becoming a player in the football league.

For Bugiel, 23, who was once a housemate of former Rocks manager Jamie Howell, will line up for Forest Green Rovers tomorrow (Sunday) as they host the second leg of a National League semi-final play-off against Dagenham & Redbridge.

The sides drew 1-1 in the first game and will do battle once more to win the right to face Tranmere Rovers in non-league’s final day at the national stadium on May 14.

It’s a far cry from his days at Chichester College, and subsequently his playing career with Worthing in the Ryman Premier League. Now German attacker Bugiel has paid tribute to the coaches who harnessed his raw talent and give him the chance to play at a higher level and earn a living as a professional footballer.

Bugiel arrived in Chichester College seven years ago, moving from his homeland to study English then studying hard for his football coaching qualifications. He told the college’s website: “It’s been a lot to take in but I’m really enjoying it. It’s a new challenge for me to rise to and I’m going to be working my socks off to prove myself.

“It all started here for me really. I owe a lot to Dabba (Kilpartrick), Dave Daniel and Paul Hinshelwood – they kept me going when I had a bad injury a few years ago.

“I broke my leg and was out for around seven months. I didn’t think I’d come back at the same level and mentally it really affected me – but they stood by me, supported me and worked hard to help me get my confidence up.

“I don’t think I would be where I am, if it hadn’t been for them or if I hadn’t come to Chichester. It’s been a long road to get to where I am, I’ve come up the hard way, through Sunday leagues, county leagues and grass root football to Worthing and now Forest Green. It definitely makes you appreciate it more.”

Daniel, who is a football lecturer and coach at the college, said: “We’re all really proud of Omar. The first time we saw Omar play, we saw he had talent and it’s been a pleasure to see him develop and grow as a player.

“Getting his chance in the National League is well-deserved and we know he will grasp the opportunity with both hands. We’re looking forward to following him on this next step in his career.”