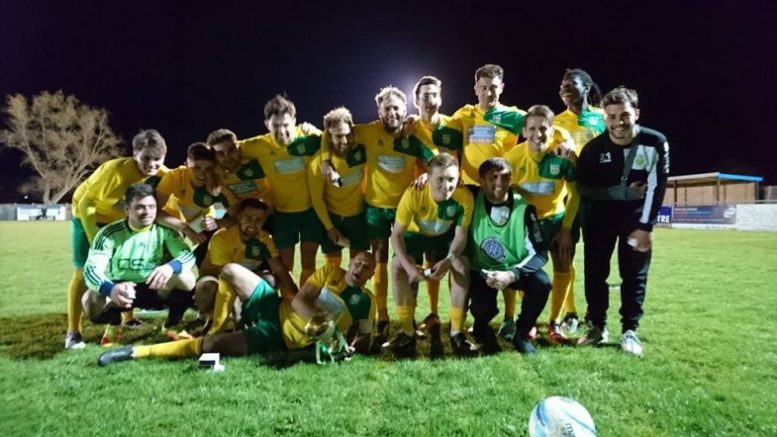 Sidlesham got their hands on some prized silverware last night when they won the SCFL Challenge Cup Final with a thrilling 2-0 win over Westfield at Shoreham’s Middle Road ground.

Manager Daren Pearce’s side got off to a bright start and were on the front foot. Callum Dowdell causing problems with his pace up front and Tom Bayley holding the ball up front.

Midfielder Tom Atkinson, who along with John Phillips and captain Greg Robinson dominated the middle of the park, settled the Sids’ nerves with a goal after 15 minutes. And it was Phillips rounded off the victory with a second with time running out.

Matt Roberts and Tom Kelly were outstanding at marshalling the defence, says a report on the club website, adding that Connor Kelly pulled off two outstanding saves, tipping the ball over the bar twice to keep Sidlesham in the lead at half time.

The report adds that Joe Leggatt replaced the injured Tom Kelly just before half time and that the second half became scrappy by both sides with each defence holding firm and free kicks breaking up the play.

Full backs Dale Hayes and Ben Buckland were doing well to stop crosses into the box and set play moving forward down the flanks. Callum Litterick came on for the tiring Bayley who was fantastic throughout, moving Dan Bassil up front. His flick to Phillips sent him through and his fine finish into the bottom corner made it 2-0 with minutes remaining.

The final substitution, says the website, saw Bassil replaced by Bradley Higgins-Pearce and Sidlesham saw out the victory and became champions.

Man of the match was given to Sidlesham defender Matt Roberts.

Based on match report by Caroline Henry Evans