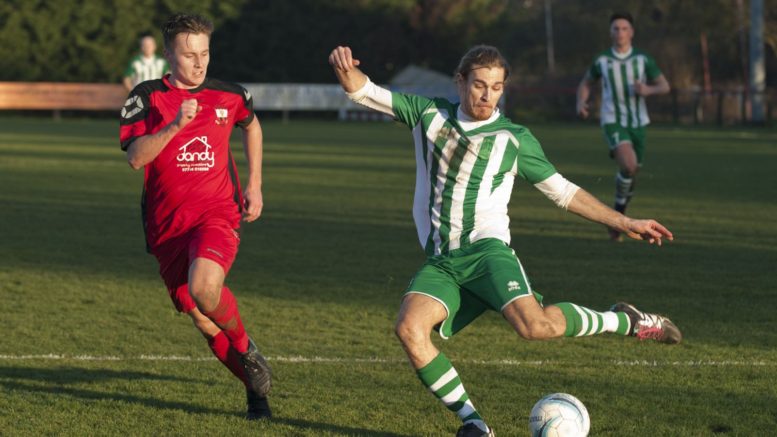 First team coach Potter surveyed the battling victory and said: “That was a great win today. We played nearly 60 minutes with ten men and we created chances, scored the winner and defended so well. Scott Jones scored an outstanding goal and the Chi Ultras were again unreal.”

This win for City has piled the pressure on league leaders Haywards Heath, as they now sit in second place, only three points behind the table-toppers.

New signing Scott Murfin, returning for his second spell at the club after signing from Pagham, praised the team’s performance. He said: “It’s great to be back. We’re really pleased to get the win. That’s the most important thing.

“I’m looking forward to playing minutes and pushing on and finishing as high as we can. Today was hard work but all the lads dug in and there was a really good team spirit.”

The first real chance for the home side came when Dave Herbert rifled a shot goalwards but Peacehaven keeper Erikson Aga was equal to it.

The visitors had an effort smack the crossbar after a decent set piece, and Ben Pashley was able to turn the ball away for a corner.

The first half’s main talking point came on 34 minutes when Ellis Martin was shown a straight red after a heavy challenge.

The deadlock was broken in the 51st minute when Chi’s leading goal scorer, Jones, rocketed a header past Aga after a well-delivered Josh Clack free-kick.

The visitors had their fair share of chances in the last 15 minutes but couldn’t find the equaliser. Chi keeper Ant Ender did well to keep out a close range shot that was then cleared off the line. City’s No. 1 then pulled off a brilliant save, tipping the ball away, to secure a fourth clean sheet in a row.

Chichester’s next fixture sees them make the away trip to Kent to face Whitstable Town in the third round of the Buildbase FA Vase on Saturday.