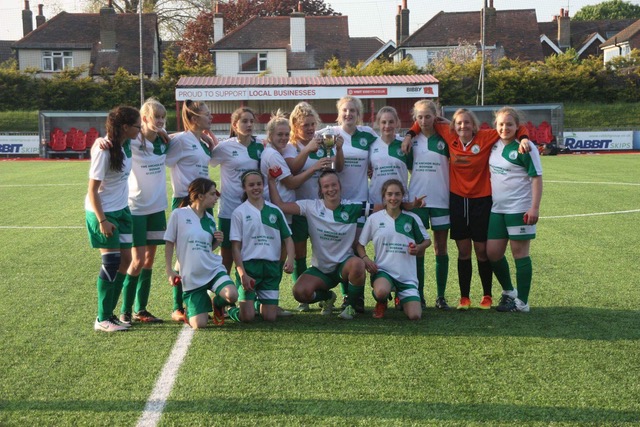 LouLou Robson was amongst the goal hero to help Chichester City U16 girls clinch a league and cup double and provide further evidence that there is bright future ahead of the club.

The glory for the budding stars of tomorrow comes on the back of unparalleled success for the senior team resulting in an impressive trophy haul to show for all of their efforts, and a busy summer ahead.

The ladies secured promotion from division south-west one of the FA Women’s Premier League as champions to the premier south division for next season, and the youngsters have dazzled, too

Chichester took an early lead through Alex Collinghan and piled the pressure on their opponents, but Withdean took a 3-1 lead before the same City ace scored once more and then Robson made it 3-3.

Penalties followed extra time and Nicole Robinson pulled off some fantastic saves in goal for Chichester before Gracie White scored the final penalty to make it 3-2.

They then followed this up t with a 4-0 league victory against Southdowns, a hat-trick for Robson and a goal from Collinghan sealing the win. This means they also won the Sussex County Women’s and Girls U16s division as well with 17 wins in 18 games!

A spokeswoman said: “Everyone at Chichester is extremely proud of their achievements this season and are looking forward to the many players who will be making the step up to senior ladies football next season.”