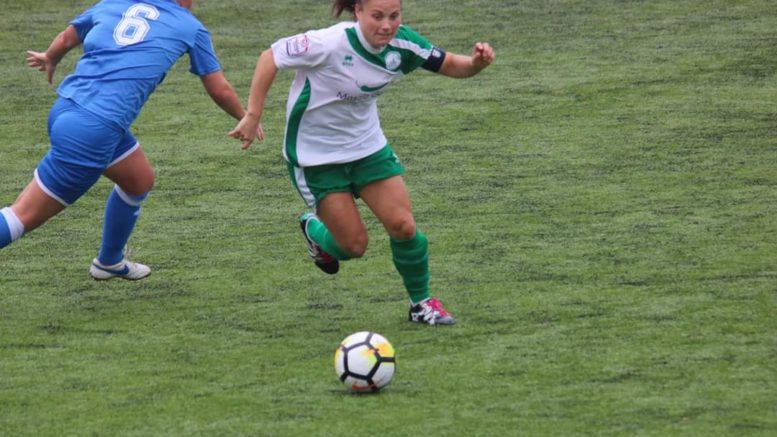 Further strikes from Chloe Tucker. Jenna Fowlie and Lauren Cheshire ensured the visitors chalked up an impressive victory, their first league win of the season.

Chichester welcomed back Kerrie Ryan to the squad and Emma Alexandre was also included as she makes her way back from recent injury.

The visitors went behind after just five minutes through a penalty and Sadie Wilson-Blakely could do nothing to prevent Cori Williams from slotting home.

But just two minutes later City were level through Jess Lewry when she pounced on a loose ball and fire home passed stranded keeper Estelle Randall.

Chichester grew in confidence after that and both Charley Wilson-Blakely and Cherelle Khassall were finding a lot of space near the hosts’ penalty area but the pressure came to nothing.

Shortly after the 20-minute mark Wilson-Blakely hit home from a corner into the back of the net to double Chichester’s lead from Lauren Cheshire in-swinging delivery.

And within minutes of this Chichester had a third when Khassall brilliantly retained possession following a clearance and, cutting in from the right, slid the ball expertly into the path of Jenna Fowlie to give Chichester the cushion of a two goal lead.

Things got even better for Chichester just after the half hour when Chloe Tucker let fly with a free-kick from 40 yards which was deflected for an own goal.

If the visitors thought they could sit on their laurels they were sorely wrong as Cardiff continued to battle and got back into the game just before the break when Caitlin Morris scored.

Then with almost the last kick of the half Wilson-Blakely made it five as she took full advantage of a back pass to easily dispossess Randall and slot home.

Ryan had come off the bench, just before the hour mark, to replace the tiring Ellis Bloomfield and LouLou Robson came on in the final quarter to add height to the midfield and lock up the game for the visitors.

Alexandre got her chance to make her return to action in the last five minutes of the game but, by then, the steam had all but gone from the home team engine and Chichester saw out time to seal the win and avenge the loss to Cardiff last season in the league cup.

West Ham make the return trip to Oaklands next week and Chichester bid to make it back-to-back league wins to propel themselves up the table.