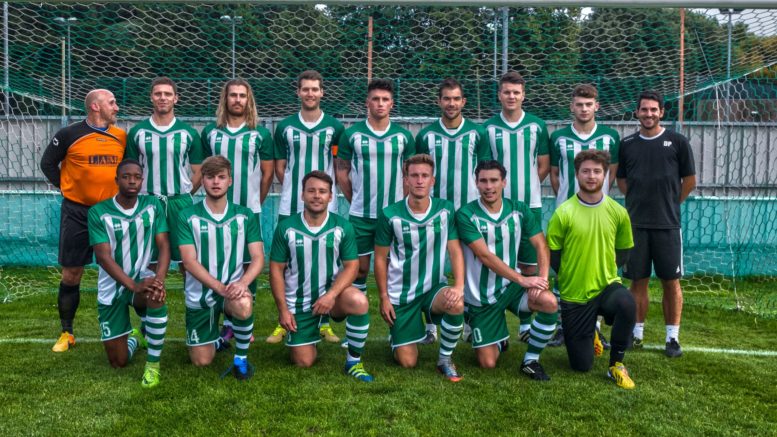 Securing the services of striker Scott Jones for the season is a huge boost to the fortunes of Chichester City as they prepare for the league kick-off on Saturday, according to coach Dan Potter.

And funnyman Omid Djalili, seemingly City’s newest celebrity fan, is no doubt delighted. The comic is said to have tweeted his approval of his view of City’s pre-season friendly match at home to Hastings from his dressing room at the Chichester Festival Theatre. He is resident for his starring role in Fiddler of the Roof; and if manager Miles Rutherford’s men can get the type of reviews he enjoys, they will be quite content.

But with the huge Chelsea fan committed to two shows on Saturday, it is beyond even his talents to be in attendance at the season’s opener at Broadbridge Heath. On the football stage, Potter believes the Oaklands Park outfit should be excited by the prospect of the campaign ahead – and the curtain-raiser with Jones spearheading the attack.

He scored in a 4-3 FA Cup preliminary qualifying match defeat at Binfield on Saturday, and he is set to lead the line in the SCFL Premier opener at the home of the Bears. Also on the scoresheet in the reverse last Saturday were David Herbert and Ellis Martin.

And Potter said: “We’ve made some significant signings and getting Scott for the season is a real boost. He went travelling at the end of last season and we missed him, so he is like a new signing.

“Dave Herbert ahs come to us from Arundel and he has been impressive in pre-season and, of course, we have dual-signed Lorenzo Dolcetti with Bognor Regis Town.

“We’re happy to bring in young full-backs Drew Smith, who was at Fareham, and Zak Sharp from United Services. George Way has joined us, he has had a spell with Moneyfields, and he is a good midfielder to have at this level of football.”

Chi finished third in the league table last time of asking, and Potter says they want to improve on that standing. He added: ‘We want to get stronger and more competitive in this league and we look forward to the opening match. But nothing is won in August or September, and we will be reminding the players of that.”

City follow-up their trip to Broadbridge Heath with the visit of Arundel to Oaklands Park on Tuesday night.