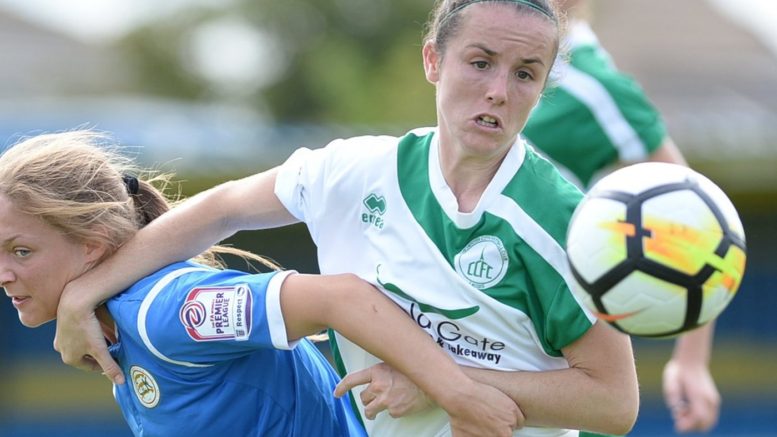 Chichester, making their debut at this level of the game after the resounding promotion success from last season, went behind early on.

After only five minutes they were behind to a sensational goal from April-Rose Bowers. She was given just too much time on the edge of the area to pick her spot and she did just that with a superb, curling effort to beat keeper Sadie Wilson-Blakey.

Basildon took great heart from this early lead and continued to probe with the likes of Karissa Rodney and Angela Addison looking particularly dangerous..

But City rallied and Cherelle Khassal and Charley Wilson-Blakely saw a lot more of ball and Chloe Dowdell saw more space down the right to plant some really teasing crosses into the area causing a few worrying moments for the hosts.

Jess Lewry got a sighter of goal and let fly only for keeper, Nikita Runnacles, to make a good save to avert the danger as Chichester continued to press. Next Wilson-Blakely showed excellent strength to cross, but Khassal’s volley was saved.

Only a minute had elapsed in the second half when the home side doubled their lead. Addison toyed with Chichester defenders before shooting through a crowd. Wilson-Blakely made a good save but could only parry into the path of Danica Revell who slammed the ball home.

Chichester, to their great credit, never gave up and had two golden chances to open their account for the season as both Wilson-Blakely and Khassal got clean through on goal but Runnacles was excellent between the sticks to deny them.

Next week City embark on their first home game of the new season against a Crystal Palace side that enjoyed a thumping win against QPR. So an exciting game at Oaklands can be expected and the adventure will continue in earnest.