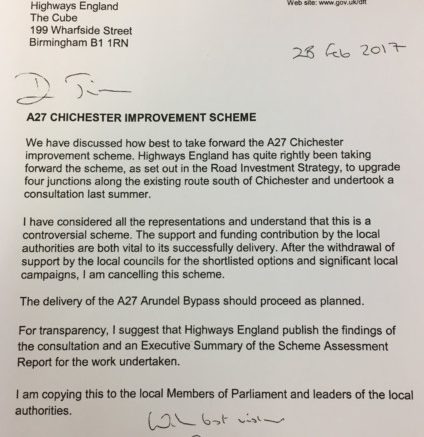 Chichester District Council chief Tony Dignum has spoken of its concern at the Government’s announcement that it is cancelling the Chichester by-pass improvement scheme.

The council supported and welcomed the introduction of the A27 improvement scheme and committed over £12 million towards it, but it urged Highways England to carry out a fair and transparent consultation process.

He said: “We must hope that the Government can be persuaded to reconsider its decision to cancel the Chichester by-pass scheme. We were close to securing a £250m investment which has now been lost. The cancellation means that the appalling congestion, especially at peak times, will only get worse, not only on the A27 but on the alternative routes used by motorists avoiding the A27. In announcing his decision the Secretary of State has now at last clarified that the Government would not agree to a northern route.

“The district council had sought a rerun of the consultation to include a wider range of options than those offered by Highways England. The council also was not satisfied that any of the online options as presented, satisfactorily addressed access to and from the Manhood Peninsula and the A27. This and other issues would need to be met by the significant changes suggested by the district council to the options offered. All we have asked for is openness and transparency.

“Contrary to the Secretary of State’s statement, the district council did not withdraw its support for Highways England Option two, subject to significant mitigations, nor have we withdrawn our promised over £12 million share of the funding.

Chichester District Council showed its support for option two within the consultation process, but asked Highways England to give serious consideration to a number of key points. It also asked the Secretary of State to explain why the previously prepared two northern options had been dropped.

It then joined West Sussex County Council in asking for the consultation process to be rerun with a range of options, including the two previously developed northern by-pass options.