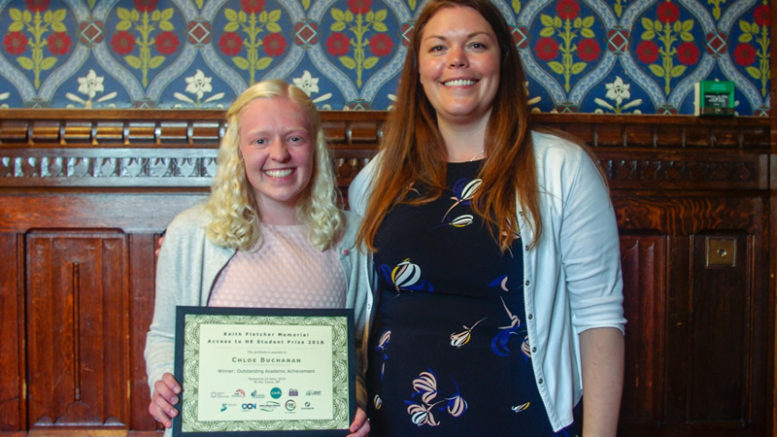 Determination, dedication and sheer talent. The trio of traits that helped Chloe Buchanan win a national education award for her achievements at Chichester College.

Chloe, 22, was presented with the Outstanding Academic Achievement Access Award at this year’s Keith Fletcher Memorial Access to HE (Higher Education) awards ceremony, which was held at The Houses of Parliament in late April.

She said: “It was a surprise to find out I had won this award. It wasn’t really until we got to the ceremony that I think I realised the importance of the award! I felt really proud to win and my family keep telling everyone, they were really excited.”

Chloe, from Gosport, completed an Access to Higher Education course in Humanities at Chichester College last year and is now studying English Literature at the University of Portsmouth.

She added: “I really surprised myself. I had a difficult time doing my A-levels and I didn’t finish them. The idea of studying anything was really scary for me, but I loved every minute of my course at Chichester. It gave me a gentle nudge back into education and built my confidence.

“I think I’ve surprised myself. If it wasn’t for the Access course, I wouldn’t be doing as well as I’m doing. I’d be completely lost!”

Chloe was nominated for the award by Chichester College lecturer Madeleine Bailey, who also attended the ceremony.

Madeleine said: “Chloe was an outstanding student. When reading her work, I found myself learning new things and considering topics in different ways. Her writing stood out for its eloquence, precision and insight. As well as strong academic skills, Chloe is also an extremely kind, personable young woman who I’m proud to see excelling at university. She really has a bright future ahead of her.”

Andrew Green, Executive Principal at the Chichester College Group, added: “This is a well-deserved award for a fantastic student. Chloe shone during her time here at Chichester, and we are delighted to hear how well she is continuing to do at university.

“It isn’t always easy to return to education; however, Chloe is a great example of someone who showed great determination and passion and is on course to achieve her goals.”

The Academy, which is only in its second year, saw off competition from eight other college sides – many of them elite category sides with links to The FA Women’s Super League — to claim victory and be crowned national champions.

Team captain Gracie White, 18, said: “It is unbelievable. The whole weekend was incredible and to wake up as champions is an amazing feeling for all of us.

“Some of the other teams had international players and had experience playing in the Super League, so we knew it was going to be tough. I don’t think any of us could have dreamed that we were going to come away with the championship.

“I just think the reason we won was down to the raw passion, determination and drive that we showed. I think we really wanted it and the whole team was buzzing – we kept each other going.”