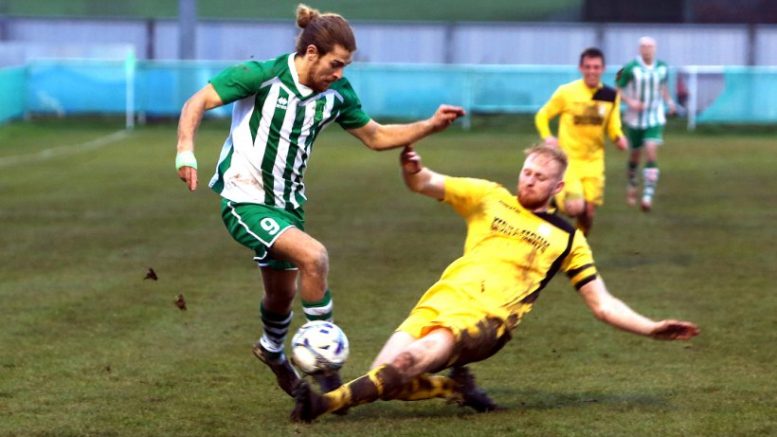 City strikers Jones and Herbert both hit trebles in an emphatic win that sends Miles Rutherford’s side to the summit, and they bid to replciate their fine form when they go to Three Bridges tomorrow.

Potter said: “Full credit to Worthing . There are a lot of young, promising players at this club. They caused us all sorts of problems at our place earlier in September. We knew that they had certain threats, so we’ve worked hard in preparation for the match.

“We’re delighted with the result, although the scoreline might have flattered us. We’re pleased for Scott Jones and Dave Herbert both getting hat-tricks. We’d like to think we can look exciting going forward on our day. We’ve got games coming thick and fast and keeping the squad fit and together is what we’re aiming to do now.”

When the teams met at the beginning of the month at Oaklands Park Jones scored three second half goals to get Chichester out of trouble after they had trailed 3-1 at the break. This time the hat-trick came in the first 45.

Jones bagged his seventh goal in four games after five minutes latching on to a pass from Dan Watts with a deft touch before tucking the ball past the advancing keeper Kieran Sills.

And Sills had to have his wits about him moments later to tip Dan Hegarty’s fierce shot over the bar. Jones tried a spectacular overhead from the resulting corner and then set up Rob Hutchings but his drive was deflected.

At the other end City skipper Jack Lee did well to ward off danger posed by Lindon Miller as the hosts pressed and Ant Ender intercepted a cross from Pat Rose intended for Deji Alabi.

The visitors went close through Lorenzo Dolcetti with a long range effort. Ruben French also wasn’t far off when he ghosted in to meet a well-delivered free-kick.

Next Jones headed narrowly wide before Sills somehow managed to turn a Dolcetti shot round the post. All this City pressure paid off on the half hour mark when Jones got on the end of a corner with a header to double the lead.

And then with five minutes to go to half-time the in-form forward completed the perfect hat-trick, with his right foot this time, after Herbert flicked the ball into his path.

Herbert had Chi’s first chance after the interval when he collected a pass from Hutchings only for his attempt to fizz wide. Jones was next off target with another header before the No.9 was part of an intricate move involving Watts and Hutchings that was eventually broken up.

Worthing’s Jamie Stideford forced a save out of Ender following a Jahobi Maher corner. Maher, who scored both goals in the 2-1 win against Pagham the previous week, had proved a real handful in his debut game at Oaklands earlier in September.

Herbert made it 4-0 on 65 minutes making the most of a mishit backpass after Kieran Hartley won an outstanding tackle in midfield.
Dolcetti drifted past a number of players barely sixty seconds later but there was no real power in his shot.

City subs Tafadzwa Kanjanda and Drew Smith, on for Jones and Hegarty, linked up nicely down the left hand side and Hartley was in the right place at the right time to capitalise on an error by Sills to grab the fifth with quarter of an hour to go.

Miller tested Ender on 77 minutes but the Chichester keeper got himself behind the ball before Kanjanda won the visitors a penalty that Herbert calmly converted.

Rutherford brought summer signing Ryan Peake on for the last ten and the former Arundel player, making his first appearance after an cruciate injury, was soon in the thick of things.

Herbert’s hat-trick came in the 85th minute with a typically classy finish after good work by Kanjanda. Mo Shuga’a caught Ender out with a late consolation for the Mavericks.