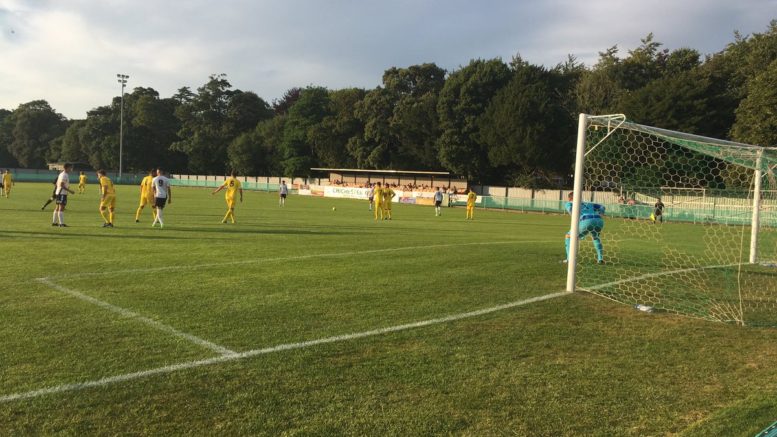 Chichester City chairman Brent Williams could forgive his shattered players for being pooped after a lung-busting 90 minutes in which they earned a creditable 3-3 draw against Salisbury.

But he may not be so forgiving to his dog for pooping on the pitch during the pre-season friendly against former Pompey ace Steve Claridge’s side at Oaklands Park last night. Fans chuckled as the in-need pooch strolled on to the pitch and did his business before being carried off during a stop in play.

Video footage of the moment of truth emerged on social media and concludes with a young lady entering the field of play to take the offending mutt from the clutches of a Chichester player…no doubt to be mildly scolded.

But hilarity aside, it was a case of back to business for Miles Rutherford’s side as they look to build on their impressive third place in their SCFL campaign last season.

Goals from Scott Jones, new boy Rob Hutchings and Harry Williams meant honours were even against the Evo-Stik League Southern Division One outfit.

And City defender Ruben French says the performance was a pleasing one and that Rutherford’s men could have possibly won the encounter.

He said: “It was very satisfying all round. There are a few aches this morning given that we are still in pre-season training but overall we’re very pleased. It was a decent game and I think on chances we perhaps should have won it.

“But at this time of year it’s all about match fitness and we’re not far off. A couple of the new boys played and played well. We will certainly try to improve on third last season and we are looking forward to the enw season.

“The pitch is immaculate and a lot of credit must go the guys who have worked so hard to get it into such good shape. It’s a pity the dog didn’t see it that way…the pooch stole the show!”

City travel to Hamble on Tuesday to continue their pre-season friendly matches.