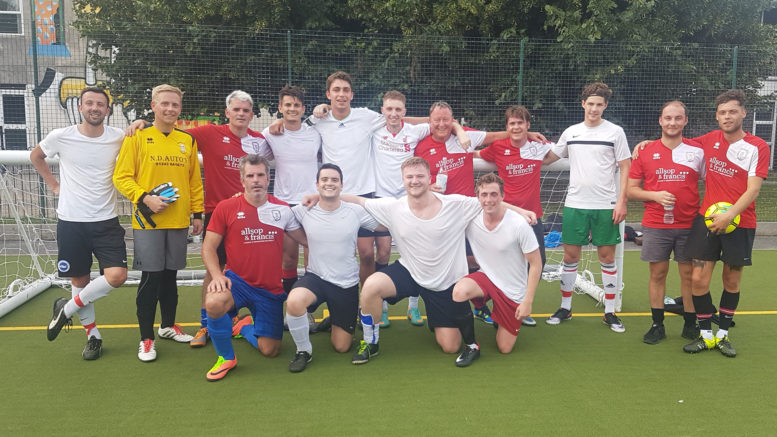 Chichester News succumbed to a heavy defeat in the inaugural charity six-a-side game against Nuffield Health – but St Wilfrid’s Hospice was the biggest winner on the night.

That’s because here at Chichester News, backed by parent company Falbros Media Group, we will fulfil our pledge to donate £100 to charity in the event of a loss.

And Nuffield Health manager Curtis Poole chose St Wilfrid’s for the donation after the match, which was played in good spirits at Chichester College.

A St Wilfrid’s spokesman said: “We’re really pleased to hear that Nuffield Health decided to donate to St Wilfrid’s in the event of you not winning the game and are thankful to Chichester News and Falbros Media Group for the generosity.”

Nuffield Health ran out comfortable 14-3 winners on the night, benefitting from a youthful and talented squad. But there were flashes of skill and inspiration from the News team, who, given their age disadvantage, coped admirably with the sweltering conditions.

Livewire Alex Ewen showed off some neat footwork and his excellent fitness proved invaluable, while brother Ryan put in a hardworking shift.

In goal, Ian Bennett earned the nickname “Kasper Schmeichel” thanks to his blonde locks and the fact that he pulled off a string of super saves to keep the score down. James Harding and Carl Eldridge played their part also but, ultimately, it wasn’t enough to resist the strength of the Nuffield Health side.

Chichester News team boss Ryan Ewen was disappointed to ship 14 goals but believes his side will only get better. He added: “We haven’t played seriously for a good while, and we showed glimpses of organisation and ability but fell short in fitness as a squad.

“We will improve and look forward to playing Nuffield again soon. they are a great bunch of lads and it was a very sporting affair. Well done to them for being victorious.’

Nuffield ace Curtis said: “We were glad to see a great turn out players and fans supporting the event, obviously we were happy to win but most importantly money has been raised to a brilliant cause.

“Thank you to the lads at Falbros and Chichester News for putting on the event and we will be closely monitoring the results they have over the next few weeks in the hope we put the most goals past them!”