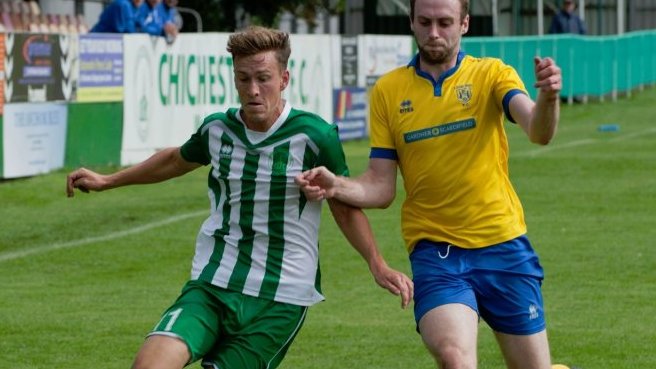 Chichester City showed five-star mentality in front of goal as they totally eclipsed Lancing 5-0 at Oaklands Park on August Bank Holiday Monday. And they did so with goals from five different players.

Miles Rutherford’s outfit showed great character to bounce back from a 1-0 defeat at Saltdean on Saturday; and they did so in style.

The breakthrough came after just 11 minutes when a Josh Clack set-piece picked out Jack Lee at the back stick to head home his third goal in as many games.

Chichester really came alive after the break with several chances before boss Rutherford sent Lorenzo Dolcetti on for Jones. And the Italian was quickly in the action volleying an effort just over bang on the hour.

The second goal came eventually, and what a goal it was. Kieran Hartley, who had replaced Hutchings, fed the ball to Clack and the Chi winger curled the ball into the top right hand corner for his fifth of the season.

With Chichester now running riot opportunities came and went on 74, 75 and 78 minutes. Dolcetti couldn’t quite sort his feet out and fired off target, Clack had a shot charged down and Hegarty was unlucky for a third time.

Then with ten minutes to go Martin’s persistence paid dividends and Clack’s cross was a good one for Dolcetti to make it 3-0 with a stooping header at the far post.

Next Hegarty followed Martin’s example turning provider for Hartley who accepted this gift graciously and thumped the ball past a despairing D’Cruz.

Tafadzwa Kanjanda, on for Clack, linked up with Hartley and Dolcetti on 84 minutes only for the shot to drift wide. Hartley, making a real impact, then hit the bar. Herbert was on hand to turn the rebound in but the striker was judged offside.

Way and Lee might have increased Chi’s lead before Herbert wrapped things up with a minute to go to end August on a high note.

In Saturday’s reverse. City keeper Ant Ender made some excellent saves but couldn’t do anything about Andy McDowell’s goal in the 17th minute that helped SCFL Premier new boys Saltdean to a hard-fought victory over Chi at Hill Park.

It’s been a month of mixed fortunes for Chichester but they’re unbeaten at Oaklands Park, scoring 14 times in three home games so far. Worthing United are the next visitors on Saturday 2nd September (kick off, 3pm)

With thanks to Ian Worden