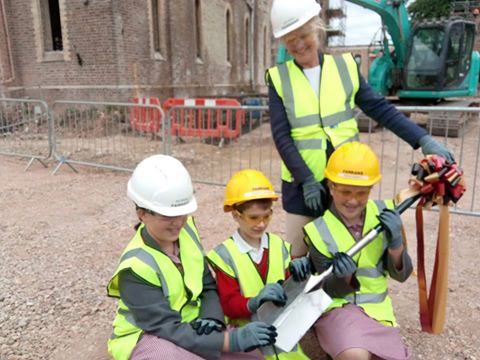 Lady March believes Chichester Free School’s new home at Carmelite Convent will prove to be “an inspiration for generations to come”.

The Countess of March and Kinrara, wife of Lord March, founder of the Goodwood Festival of Speed and the Goodwood Revival was guest of honour as the school held its official groundbreaking ceremony at the convent on Friday.

The event was attended by pupils, staff and governors, and was hosted by the school’s builders, Farrans Construction, who provided a site tour including allowing us into the building itself to see the work in progress.

And she said: “It is wonderful to see such a lovely building being used again and I am sure that it will be an inspiration for generations to come.”

Members of the school’s student premises committee were invited to attend the ceremony and Sam Wood, from Year 9, said, “I was here when it was announced that the school was going to be on this site and in this amazing building. It’s so exciting to think that we will all be learning here in just over a year’s time – I cannot wait!”

A message on the school’s website said: “It was amazing to come back after our initial visits in previous years into what was a derelict, damp and decaying building. To see it stripped back and opened up to reveal the large spaces that our children will enjoy as well as the perfect mix of the ancient and modern, including the first steels going up just this week in what will be the Secondary wing, is quite simply breathtaking. Many of us will have seen the steel superstructure emerging on the far side of the convent from the Hunston Road.

“Farrans are putting these up at an electric pace and we will see the full outline of what will be the new secondary block soon. There can be no doubt that after waiting so long, the dream of our new school is becoming reality.”