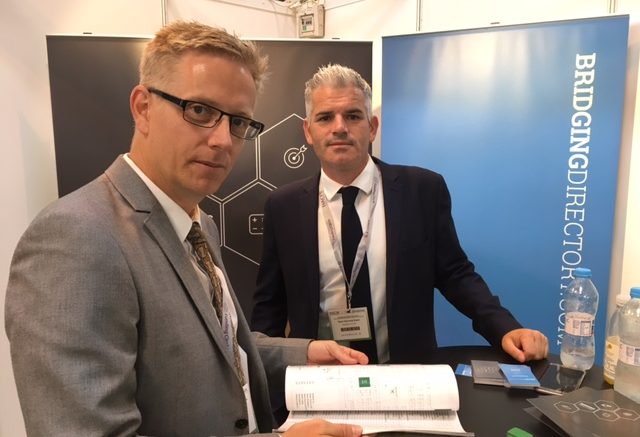 Two Chichester University students have been praised for combining an imaginative approach with a professional edge as they captured a business exhibition on film.

The duo had the chance to use their creative skills on behalf of a Chichester company showcasing their services at the recent Commercial Finance Expo 2017 in Birmingham.

Curtis John Arnold-Harmer and Chantelle Walker were on hand to help capture the event on film and stills, as well as live Twitter footage, for the media arm of Falbros, a mortgage broker based in Chichester’s Metro House (and who have a London HQ).

And Curtis, who along with Chantelle has just finished a degree in theatre, said: “It was a truly exciting and eye-opening expo showcasing the quirky yet concise creative innovation within the finance sector.”

Falbros’ Bridgingdirectory.com team exhibited at the hugely popular show, at Birmingham’s NEC, which is considered a must-attend expo for anyone with an interest in commercial finance.

Spokesman for Falbros, which owns Chichester.News, Ryan Ewen said: “It was fantastic to see just how creative Curtis and Chantelle were in an arena that could do with a bit more colour, to be honest!

“They truly delivered in terms of professionalism too. Chichester University has obviously served them well and it redoubles our belief that we are so lucky to have such a fine educational establishment on our doorstep.

“We’d definitely be keen to explore more collaborative options with colleges and universities to offer work experience and the like.”

The event, which is staged by the National Association of Commercial Finance Brokers (NACFB), proved valuable in business terms, said Mr Ewen.

He added: “We received some valuable feedback from the industry giants which has helped us shape the next six-month development plan.”

This year’s expo featured a new style of conference with panels tackling a range of topics most important to commercial finance brokers. These included the changing face of buy-to-let in which the NACFB looked at how tax changes will impact landlords and how those changes will reshape the lending landscape.

Other hot topics discussed and debated were Brexit and the prospects for UK growth, inflation and interest rates over the next two years. And a panel debated looking at what is so special about specialist lending featuring representatives from NatWest, Lloyds and Investec taking on their counterparts at Funding Circle, Amicus and Nucleus.

Head of Digital Ian Bennett said he was encouraged at the response to BridgingDirectory.com’s presence. He added: “It was great to see such a positive reaction to BridgingDirectory.com at our stand. Engagement from brokers, lenders and the general public has been huge since launch and seeing this at the exhibition showed that we are gaining excellent traction in the industry.”