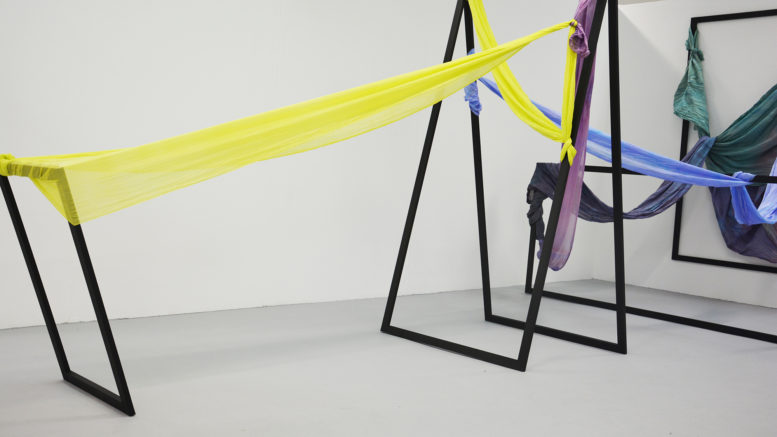 The exhibition, being held at the Aspex gallery in Portsmouth, is part of an annual graduate award which supports promising talent across the south of England.

Pietra, a BA (Hons) in Fine Art graduate has produced a mixed-media installation which draws attention to the experience of space.

She said: “The frames are representational of doors or passageways in which we pass through on a daily basis. The rigid structure supports suspended and draped fabric, which resemble bodily or ghost-like figures.

“These forms are embedded within the space, they push and pull, obstructing space and moving motionless, creating an ethereal.”

The installation opens on Thursday 14 September and will run until Sunday 26 November. It includes the work of 10other students at the universities of Portsmouth, Southampton Solent, Creative Arts Farnham, Arts University Bournemouth, and the Winchester School of Art.

As part of the exhibition one of the 12 artists will be nominated by the Aspex gallery for a year-long professional development programme.

The winner, announced later this year, will be given a £2,500 bursary alongside mentoring opportunities with artist Jonathan Parsons.

Morgan Ward, also a BA (Hons) in Fine Art graduate, said his practice aims are to investigate the relationships between colour, form, and space.

He added: “A key aspect is the expansion of a space, both physically and as an abstract illusion. Translating forms and using colour suggestively signify space and allows me to build interconnected sequence as a network between my paintings.

“How the viewer can be manipulated in a space to react a certain way towards specific works has become the research focus of the work.”

The Platform initiative is supported by five galleries across the country including Aspex in Portsmouth, De La Warr Pavilion in Bexhill-on-Sea, MK Gallery in Milton Keynes, Modern Art Oxford, and Turner Contemporary in Margate.