Police have released an e-fit image of a man they would like to speak to in connection with two reported indecent exposures in Chichester.

The first happened at around 7pm on Wednesday, 18 January, along the A285 St Pancras. The victim, a 28-year-old woman, was walking past Woodies Wine Bar when she saw the suspect walking towards her.

He exposed himself before continuing to walk off towards the one-way system.

The suspect was described as white, aged between 20-24, and of slim build with short brown hair and glasses.

The second incident happened at around 9.15am on Monday (23 January) where a man of similar description was seen exposing himself in Bishops Palace Gardens.

Detective Constable Louise Clark said: “We would like to hear from anyone else who saw something suspicious on these days.

“Also, if you recognise the person in the image, then please get in touch.” 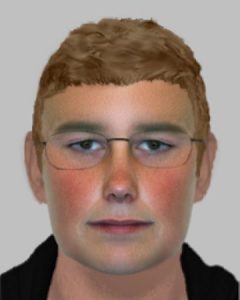