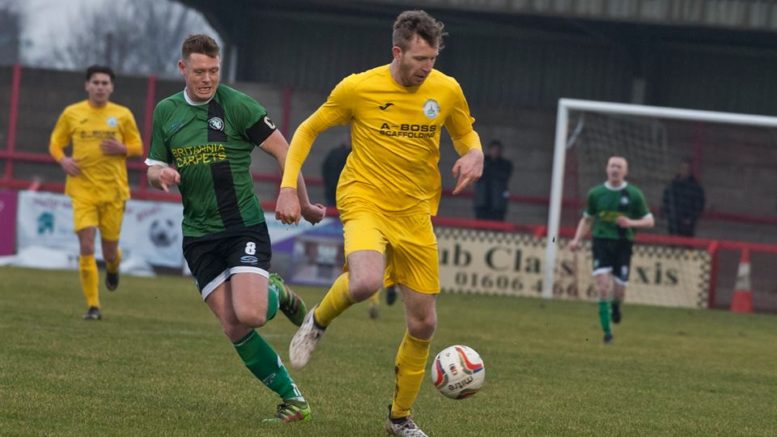 Two goals from Jimmy Wild helped Chichester close the gap on leaders Horsham after their thrilling 3-2 win over 10-man Crawley Down Gatwick in this SCFL Premier Division match.

This now takes the striker’s tally to six goals in three games and this win sent Chi to second-place on 53 points, just four behind the leaders, still with a game in hand.

Chi play Littlehampton next and Horsham play Worthing United, who are both within the relegation battle, before meeting each other in the league on March 3rd.

City got off to a fine start in this five-goal thriller, opening the scoring after just three minutes. Skipper Jack Lee got on the end of a well-delivered Ruben French cross and headed into the corner.

Dave Hebert then had a fierce effort saved by the visitors’ keeper, Seb Bos. But, the second goal came after a good run and pass from Herbert found Rob Hutchings, who delivered a perfect cross onto the head of Wild and the striker nodded home.

Crawley managed to get a goal back after a mistake from Chi led to a shot from close range finding the back of the net.

Immediately after this, City went straight down the other end and extended their lead when Wild neatly lifted the ball over Bos and into the net.

The visiting side then got another goal back to make things interesting, this time a set-piece found centre-half Marc Pelling whose header beat Chi keeper, Ant Ender.

The second half was a different contest entirely, with neither side threatening to score. Shots flew wide of the mark, were deflected for corners and fizzed across the face of goal.

Crawley finished the game with 10 men after Williams Peauroux picked up a second yellow card and was shown his marching orders in the last few minutes of the game.

The next fixture for Chichester sees them entertain bottom-of-the-table Littlehampton at Oaklands Park this Saturday.