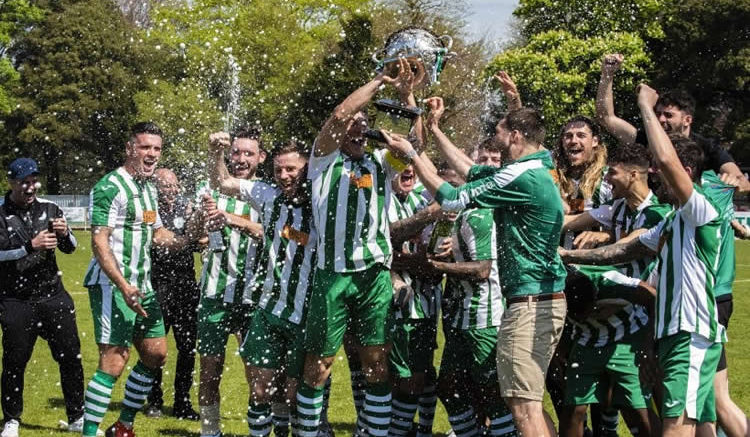 Football is flourishing in Chichester. You only have to peruse the season that has just gone before us to confirm that! And that applies to both the men’s and women’s game in the city.

Chichester City, managed by experienced boss Miles Rutherford – a former Bognor Regis Town player — will play their football in the Bostik South East next season thanks to a thrilling season in the SCFL premier division in which they were crowned champions.

And the Oaklands Park outfit have plenty of mouth-watering fixtures to look forward to in the upcoming campaign, and the prospect of a tantalising crop of Sussex derbies in the higher division, against Burgess Hill, East Grinstead, Hastings, Haywards Heath, Three Bridges and Whitehawk.

The promotion is just reward following a scintillating season that culminated in winning the title in a campaign that saw them crash home an amazing 107 goals over the season which also featured a run of 23 league games unbeaten. Plus, the rear-guard was in top form, too, with a total of 17 cleans sheets.

City collected the silverware after a momentous 5-0 win over local neighbours Pagham at the end of April, when Josh Clack hit a hat-trick and Scott Jones bagged a brace, pictured (Picture: Tommy McMillan).

Meanwhile, Chichester City Ladies are continuing to make progress both on and off the pitch. There have been changes at the club after a successful season in which they came third in the southern premier division of the FA Women’s National League and also won the Sussex Women’s Cup.

The club have appointed a new head coach Sadie Blakely, who comes in to replace Aaron Smith. A spokeswoman says:

“She comes to the club with experience of our current league as a winner and with many years in the game at a high level. She has previously also played for our first team.

“Alongside her will be her assistant manager Laura Galway who has played at the highest level in the women’s game. The head coach will be Kim Stenning who is currently studying for her UEFA A badge and will be working with Emma Alexandre, the head of our youth set-up. One thing we are very proud of is that we have chosen four women to run our first team — as well as others — and just shows the dedication and commitment to the women’s game by our club.”

“ensure that our player pathway is available for all players looking at making the step up to senior football”.

Jake Edwards will boss the outfit and Hannah Humphries will be his assistant and coach after a season working with the U16s.

As we said, football is flourishing in Chichester!