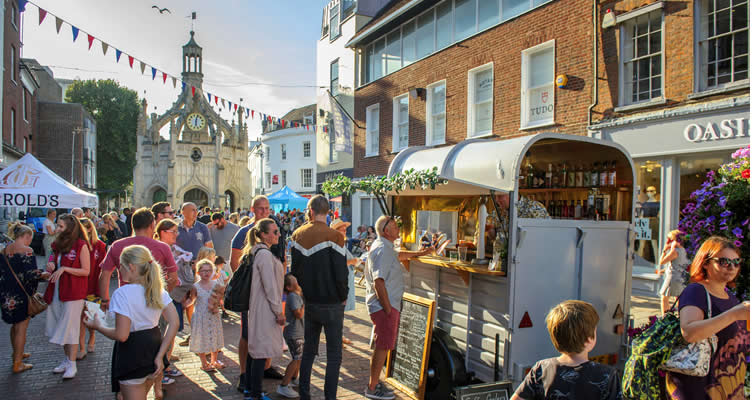 Chichester District Council’s very own big party guru Norma Graves has told of her delight after the success of a summer event that went down a storm with locals.

Hundreds of party-going folks got into the spirit of things at the city’s first ever Summer Street Party, which took place on Thursday, August 22.

The event encouraged residents, workers and visitors into Chichester city centre to celebrate the High Street, with many shops and businesses taking part and staying open late to host in-store fun activities and offer refreshments. The party was staged by Chichester District Council, and done so with support from the Chichester Business Improvement District (BID).

Councillor Graves, who is the cabinet member for corporate services, communications, licensing and events at Chichester District Council, has passed on her gratitude to those who helped make the event such a success and spoken of her joy at seeing so many people have so much fun.

She added that she was delighted to see crowds of people enjoying the super entertainment, delicious street food, and music and made mention of the local groups who put on entertainment — such as a bubble show and face painting — for children.

She also spoke of how grateful organisers were grateful to bosses at Co-op — which is set to open a new store in East Street on October 25 of this year — for sponsoring the event and helping to showcase all that Chichester has to offer. This, she says, includes

“unique and independent stores, through to major brands. It’s vital that we support our local High Streets, particularly in the current financial climate, and this is a fantastic way to bring everyone together to celebrate our city”.

Reveller Grace Barclay, visiting from Bristol, said the event was a great way to showcase just what the city had to offer and that she was surprised at just how much of a party atmosphere quickly developed. She said that Chichester was a wonderful city and that it was encouraging to see so many people having such a good time at the summer jamboree.

“I’ve been to Chichester many times and one thing previously I thought about the place is that it was anything but a party venue. But to my surprise everyone quickly got in the spirit and overall, I think it was a huge success. Well done to all who made it happened. I think that it is certainly something that should be looked at again, perhaps staging similar events at Christmas or even Easter. I am sure that it would be as well received as this party was and that can only be hugely positive for all concerned.”