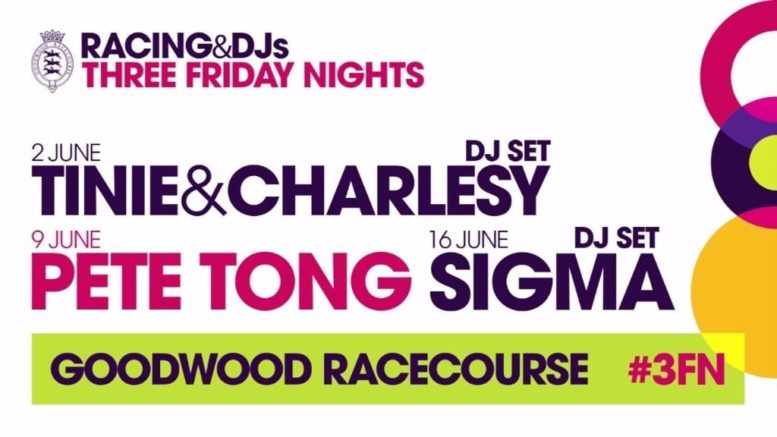 Tinie Tempah is a racing certainty to be a winner when he kicks off Goodwood’s Three Friday Nights tomorrow at the famous race course.

Tempah, who has had seven No.1 UK hits, starts brings his inimitable rousing style to the turntables together with Capital XTRA’s DJ Charlesy, the first set of three with Pete Tong and Sigma set to follow on consecutive Fridays.

Music fans and racegoers alike will flock to the event but some tickets still remain with organisers telling party-goers to expect a rich mix of club bangers and minimalist beats.

Tempah is said to be the most decorated rap artist in the country. His Platinum-selling album “Disc-Overy” contains the massive singles “Pass Out” and “Written in the Stars”, which launched him to the very top of the British hip-hop tree and his second album, “Demonstration”, has kept him there.

But the award-winning artist is no stranger to the turntables and alongside DJ Charlesy has spun the decks at top London clubs and taken up residencies in Ibiza.

Tinie’s latest album “Youth” is his deepest and most eclectic to date, capturing a magic that’s rich with personality, contrasting boisterous rhymes with a slow burning shift of mood and pace.

Racegoers can look forward to n amazing night of music as the duo bring new and exciting sounds to the intimate setting of the racecourse parade ring.

The Pete Tong night is completely sold out but there are still tickets for Sigma available.

It would be a crime to miss free arts workshop in Chichester, says writer Peter Lovesey