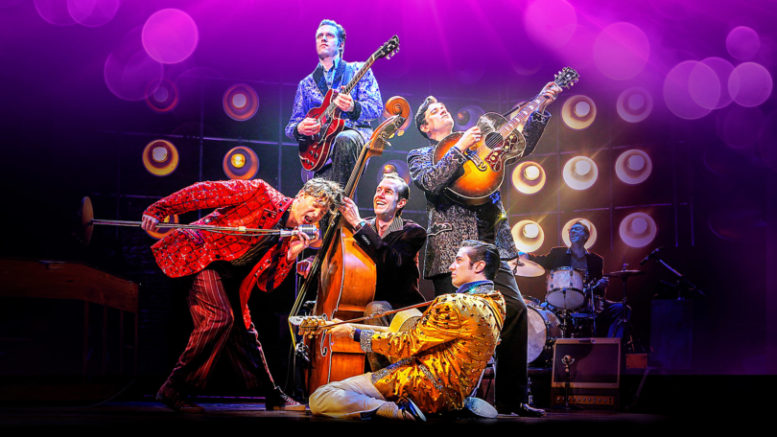 Who knew rock ‘n’ roll king Elvis Presley was at his hip-swivelling best in a show currently showing at Chichester Festival Theatre? Okay, not the actual “Pelvis” himself but in Rhys Whitfield we had the next best thing.

And he was joined by three other greats, Johnny Cash (Robbie Durham), Jerry Lee Lewis (Martin Kaye) and Carl Perkins (Matthew Wycliffe) on stage to the delight of  an audience who took no time at all to leave their seats and start boppin’ in the aisles.

Martin Kemp, yes, he of Spandau Ballet fame, led the terrific cast in the role of legendary record producer Sam Phillips – the Svengali figure who brought the four megastars together to create a lip-curlin’ chapter in musical history.

It can’t often have been said that Elvis Presley was eclipsed on stage but Martin Kaye as JLL probably did so as he pretty much stole the show with a pulsating performance packed with boundless energy and authentic moves all brought together with a superb soundtrack — and yes, overall, there WAS “a whole lotta shakin’ goin’ on”!

This was, of course, the Million Dollar Quartet, the musical that is in Chichester following its sold-out success in the West End and on Broadway. The worldwide smash-hit is inspired by the one-time-only recording session that brought together the iconic rock ‘n’ roll figures.

It transported a wildly enthusiastic audience back to December 4, 1956, and the gathering of the four musicians at Sun Records in Memphis for what turned out to be one of the greatest jam sessions ever. This hum-dinger features a score of rock classics including Blue Suede Shoes, Fever, That’s All Right, Great Balls of Fire, Walk the Line, Hound Dog and so many more.