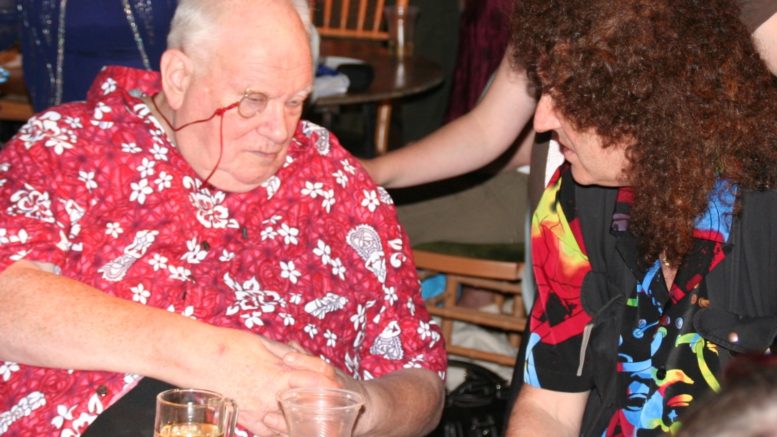 A fascinating insight into the first 25 years of the extraordinary life of stargazer Sir Patrick Moore will be given by a close friend of the man many considered a national treasure.

The early life of one of Selsey’s most famous sons, who died in 2012, will be the subject of a talk at the Record Office in Chichester on June 27 by a man who knew him for 45 years.

World-renowned astronomer and principal lecturer at the South Downs Planetarium, Dr John Mason, will lift the lid on the life of the knight of the realm before he became a household name as an astronomer, author and broadcaster.

And he will showcase examples from a large collection of observational notebooks compiled by Sir Patrick, pictured in his latter years with rock star Brian May, together with memorabilia recovered from his former home in Selsey. The notebooks have recently been digitised by staff at the West Sussex Record Office and the audience will have an opportunity to view images on their public access computers.

The event has been organised to coincide with the 60th anniversary of the BBC’s Sky at Night programme, presented by Sir Patrick from its first episode in 1957 until his death in 2012. The talk will be held at West Sussex Record Office, 3 Orchard Street, Chichester on Tuesday 27 June at 7pm.

A limited number of tickets are available at £8 each (including light refreshments), which should be purchased in advance by visiting the Record Office or calling 01243 753602.