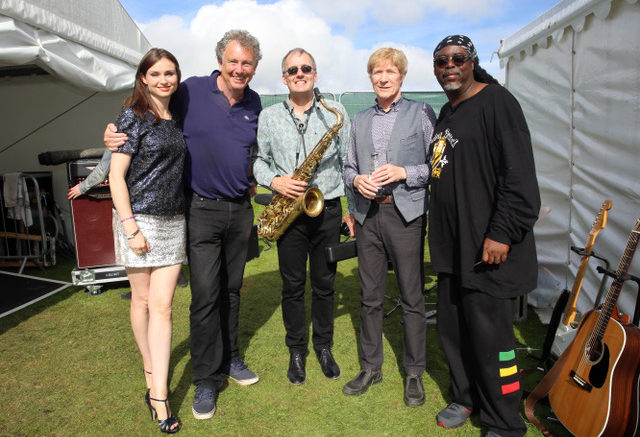 Robin Bextor knows the value of a good laugh. And with that in mind the impresario behind Chichester’s Priory Park Festival has a couple of comics up his proverbial sleeve to raise a titter or two come a fun-packed weekend of merriment, song and dance in July.

Mr Bextor, well known as a TV and film producer and – of course, as the father of pop star Sophie Ellis-Bextor – has already engineered an eclectic musical line-up for the second annual event in the city following the triumphant success of last year’s party in the park, part of this year’s Festival of Chichester.

Headliners such as Tony Christie, The Stranglers’ Hugh Cornwell, S Club, Dodgy, Georgie Fame, Deborah Bonham and The Christians are whetting the appetite of festival-goers but the prospect of a good few side-splitting guffaws in between dancing around your picnic can never be underestimated, can it?

But for the time being Mr Bextor is withholding the punchline, as it were. He tells Chichester News: “We’ve already got comedy band Tomfoolery performing and we have a couple of stand-up comics lined up for the marquee and we’ll be announcing them soon.”

Sophie Ellis-Bextor and her husband Richard Jones’ band The Feeling appeared to great acclaim in the inaugural festival last year but Mr Bextor has avoided the temptation of asking them to perform once more.

He jokes that last time of asking he threatened to withhold the pocket money of his daughter lest she appear but, in all seriousness, he feels that the event must stand on its own two feet: “I don’t want it to become a case of people thinking, ‘oh yes. that thing that Sophie appears in every year,” he explains.

As for for the rest of the acts ready to take to the stage, Mr Bextor is particularly thrilled to see Chichester welcome Jim Cregan, who will be appearing at the festival as Cregan & Co. He is best known for his work with Rod Stewart – he co-produced, co-wrote and was his musical director for nearly 20 years.

His songs have also been recorded by Joe Cocker, Willie Nelson, Kid Rock, Russel Watson amongst many others, and he has played on stage with Tina Turner, Elton John, Cat Stevens, Jeff Beck, Frank Zappa, Pete Townsend, Chuck Berry and Katie Melua.

Mr Bextor adds: “He has received more than 40 gold and platinum records to date, and played the guitar solo on Cockney Rebel’s ‘Come Up And See Me (Make Me Smile)’, which, of course, when you listen to it makes you do exactly that.”

Tickets: www.prioryparkfestival.co.uk, or in person at Novium (Tower St, Chichester) or by phone 01243 775888 – option 1). Tickets are discounted for all carers, and children under-11 go free with an accompanying adult. Doors open at 5pm on the Friday and 1pm on the Saturday and Sunday. All music will conclude by 10.45, earlier on the Sunday.