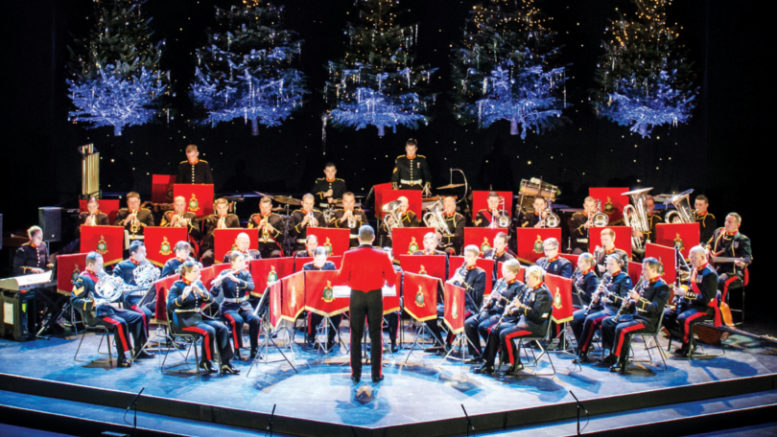 Christmas has definitely arrived in Chichester. Whether or not its arrival is early can be argued until the festive decorations are packed away in boxes and returned to the loft for another year.

What isn’t in doubt, though, is just how enjoyable it is to celebrate yuletide at Chichester Festival Theatre — especially at the Christmas Concerts with The Band of Her Majesty’s Royal Marines Portsmouth and Chichester Cathedral Choir.

If a show is ever going to to catapult you into the spirit of the season, this is it! A packed house warmed to traditional carols, seasonal sing-alongs and even a corny Christmas cracker gag or two.

The Cathedral Choir, directed by Charles Harrison, and The Band of Her Majesty’s Royal Marines, directed by Captain Andy Gregory, combined to deliver a magical evening crammed with heart-warming festive classics.

A repertoire of much-loved foot-tappers, including the likes of Jingle Bells, Leroy Anderson’s Sleigh Ride, Silent Night and Hark! the Herald Angels Sing, the band and choir kicked off the season off in style.

A particular highlight for many was a incredible trumpet solo and rousing renditions from the band’s majestic Corps of Drums. Had their been a tinsel-clad clap-o-meter in the house following these performances it would be in need of urgent repairs ahead of the next show.