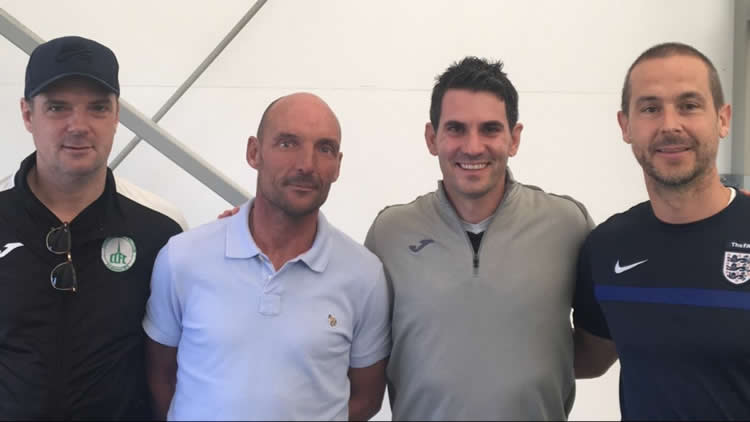 Chichester City are leaving no stone unturned in their quest to build on their promotion from the Sussex County Football League last season. The Oaklands Park outfit will play their football in the Isthmian League in the forthcoming campaign after being crowned champions last term.

And what many see as a defining appointment this summer, City have snapped up the services of Darin “Dabba” Killpartrick, a highly-rated coach who was formerly in various senior roles at Bognor Regis Town (he is also England Colleges coach and Chichester College football academy boss).

The recruitment of Killpartrick means City boast an enviable management set-up with boss Miles Rutherford being ably assisted by right-hand man Graham Gee and coach Dan Potter. It all contributes to a feel-good factor at City — and the news of Killpartrick’s role was met with excitement by fans and observers on various social media platforms.

And indeed, Tommy himself followed up his Dad’s Tweet with the assertion:

“Can’t get a much better coach.”

“Tremendous signing…someone I look up to and admire…Chi City will be one to watch 100 per cent…AND most importantly they’ll know doubt play some great football!”

Another move to demonstrate just how seriously the club are taking their promotion and bid to establish themselves in the Isthmian League is the appointment of a new goalkeeping coach in the shape of Scott Miller — and a Tweet on the club’s official account said:

“The club are excited to announce Scott Miller as our new goalkeeping coach. Scott met with Miles, Gee and Potts today to agree terms. Another great addition to our coaching set-up.”

And in terms of just how important the club take off-the-field matters, Andy Bell has stepped up to be club chairman with Ashley Clack taking a step back to be vice chairman (having previously been chairman) providing a very strong leadership team.

On the pitch, City have already returned to pre-season training and they will get the chance to test their fitness when they undertake a taxing set of pre-season fixtures.

The action unfolds on 6th July when they travel to face an IoW Rep side, before heading to Arundel on 13th July and then on to Christchurch on 16th July with a trip to Hamble four days later on July 20th July.

Rutherford’s men then go to AFC Portchester on 23rd July before hosting their first home game of the pre-season itinerary when Bostik Premier division Worthing are there visitors on 27th July.

Lancing FC’s Culver Road, which doubles up as the Sussex FA’s HQ, is the venue for City’s keenly anticipated game against Bognor in the Sussex Community Shield in aid of the NSPCC. On 3rd August City complete their pre-season fixtures when they are on the road to face Moneyfields.

Meanwhile, the club have various sponsorship opportunities on offer ahead of the new campaign – would-be backers should email sponsorship@chichestercityfc.co.uk or call 07801 957320.