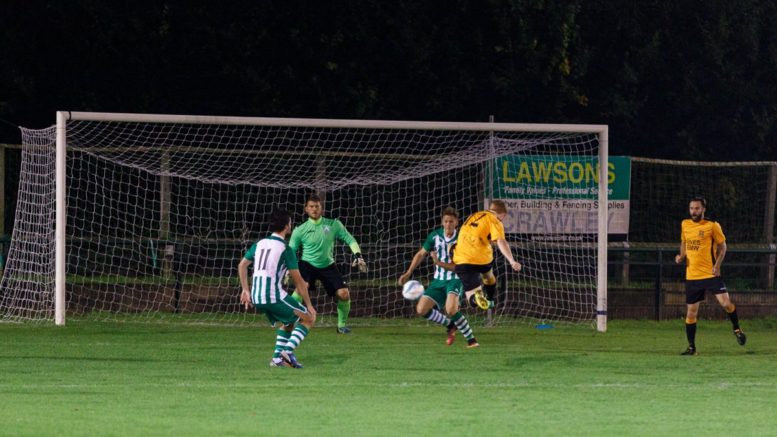 On fire Scott Jones netted his 10th goal in five games when Chichester drew 2-2 with Three Bridges in an exciting contest on Tuesday night.

The visitors threatened early on with some high pressing and shots crashing into the side netting. The hosts also had their fair share of attempts with some fizzing just wide of the mark.

The Oaklands Park outfit started strong but despite the flurry of chances flying in from both sides, no one was able to convert and the first half ended goalless.

The deadlock was broken early in the second half with Three Bridges going ahead following a corner that Chi struggled to clear. The hosts then doubled their lead through a counter-attack in the 72nd minute.

Miles Rutherford’s side responded immediately through a calmly taken penalty from Ellis Martin following a foul on Jack Lee. Jones continued his hot streak of goals when he netted the equaliser with less than 10 minutes to go.

Coming into this fixture Chi topped the table, but this result meant Peacehaven & Telscombe have jumped above them following their win at Newhaven.

CCFC will look to reclaim the top spot with a victory in their next fixture when they visit Littlehampton this weekend. They will also look to go on a cup run when they face Haywards Heath Town in the Parafix Sussex Senior Challenge Cup next Tuesday.