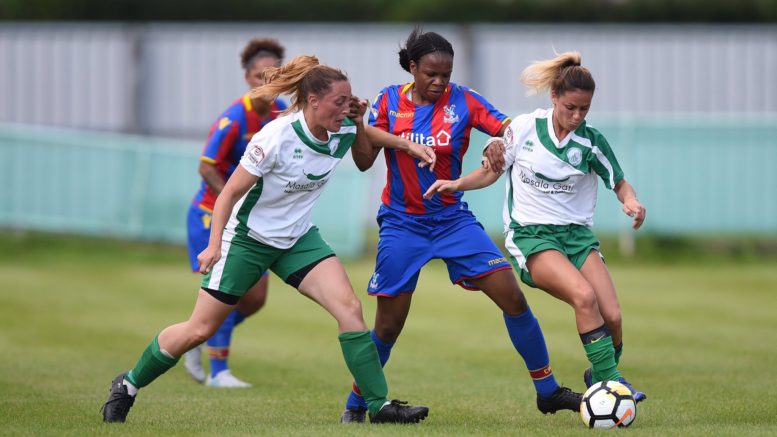 Chichester City Ladies suffered a second defeat of their in FAW Premier League Southern campaign with a 4-2 defeat at the hands of Crystal Palace ladies at Oaklands Park.

Both teams started at a strong pace from the off but few chances were apparent in the early going with both keepers rarely tested. Ciara Sherwood then got a sighter of goal and let fly but Sadie Wilson-Blakely saved.

The Eagles had won comfortably last time out and it wasn’t too long before they undid the Chichester defence to open their account; and it was a defensive slip that proved costly.

A 15th-minute corner wasn’t cleared and Sherwood slammed a shot passed Wilson-Blakeley from 10 yards. Chichester didn’t let their heads drop and soon Charley Wilson-Blakely and Cherelle Khassal did their best to get the home side back in the game.

But their efforts were undone approaching 30 minutes when the Eagles to double their lead through the excellent Nikita Whinnett. Gemma Bryan raced in on goal and her attempt was saved by Wilson-Blakely but fell into the path of unchecked Whinnett who slotted into the empty net.

Chichester got on the score sheet shortly afterwards with their first goal of the new season from the ever-present Charley Wilson-Blakely. Jenna Fowlie worked some magic down the left and swung in a brilliant cross and Wilson-Blakely met it with a perfect header that was too good for keeper Megan Lynch.

Hopes for a second half response from the hosts were dealt a huge blow with only a minute or so gone after the restart when they were caught out at the back by another quality attack from the Eagles. This time Ellie Bailes was the beneficiary of a loose ball in the box and was able to poke it under Sadie Wilson-Blakely.

Charley Wilson-Blakely and Khassal both had chances and Jess Lewry should have scored when racing through on goal, rounding Lynch but then seeing her goal bound effort, somehow, cleared off the line by last ditch defending by Steph Simmons.

The visitors struck again with the game into its final throes when Bryan surged into the box and fired a low shot into the back of the net to seal the points for the visitors. Seven minutes were added on after the 90 minutes and in the last minute Chichester grabbed a deserved second goal with a sublime volley from Gemma Symonds.

Symonds was unchecked in the box to smash home a Lucie Challen corner at the back post to earn the hosts respectability from the game.