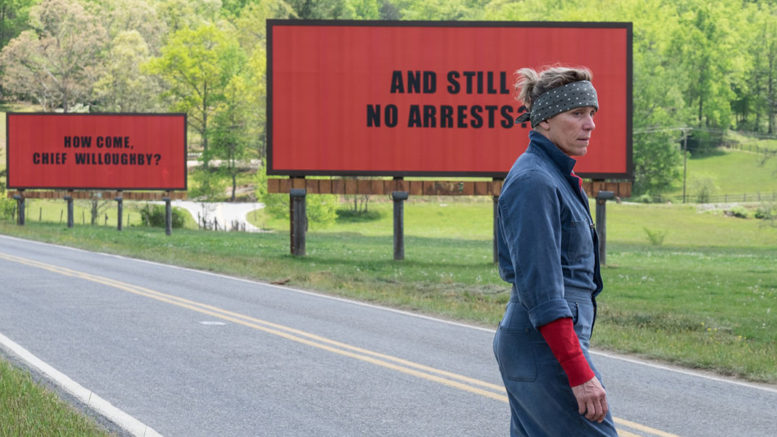 Three Billboards Outside Ebbing, Missouri (15) is written and directed by Martin McDonagh, who also wrote and directed the brilliant In Bruges and Seven Psychopaths.

In this film we follow Mildred Hayes (Frances McDormand) as she personally challenges chief of police William Willoughby (Woody Harrelson) to solve her daughters murder by putting up a number of controversial billboards.

I will be shocked if McDormand doesn’t receive an Oscar nomination. In fact, I want her to win it. Her performance was captivating. She commands the screen in every scene she was in and her ability to verbally humiliate countless Ebbing residents was hilarious.

While being insanely funny, especially with the monologue she delivers to the priest, she also delivers numerous emotional moments that hit you hard and show us Mildred’s softer side. McDormand is able to produce shocking moments of humour as well as giving us genuine moments of sorrow and compassion.

McDormand is surrounded by an incredibly talented supporting cast. Harrelson gives another memorable performance; his character was very authentic and his humanity shines through resulting in a very touching portrayal. But it’s Sam Rockwell who gives the performance of his career. His character goes on a fantastic story arc, as we don’t really like him at first, but he is redeemed in a very rewarding and believable way.

Now let’s get onto the script…McDonagh knocked it out of the park. His character development was exceptional, the emotional moments were very effective, and his humour goes to some dark places, but on reflection you see how smart and well-written that particular piece of dialogue was.

Somehow, McDonagh was able to make us laugh out loud then immediately deliver an emotional sucker punch to the gut. Then he would give us a serious, uncomfortable scene then resolve it with an effectively sympathetic moment.

One of the best parts about the film was its unpredictability. You would be sitting there thinking you know where a particular scene is going then it’ll change gears (the interrogation scene does this particularly well). It made me just sit there and watch the film unfold instead of trying to guess what’s going to happen next.

My only criticisms of the film are nit-picks. I wanted a little bit more of Peter Dinklage. He is such a fantastic actor and his character was introduced early on but disappears for a large chunk of the film. The only other thing, and I’ll be careful to avoid spoilers, was that I wanted more from the ending, perhaps one extra scene to round it all off, but hey like I said, I’m just nit-picking.

Overall, Three Billboards is a thought-provoking, darkly comedic drama with outstanding performances from the whole cast. The laughs are toned down a bit, as opposed to McDonagh’s previous films, in favour of more poignant and hard-hitting moments of drama.