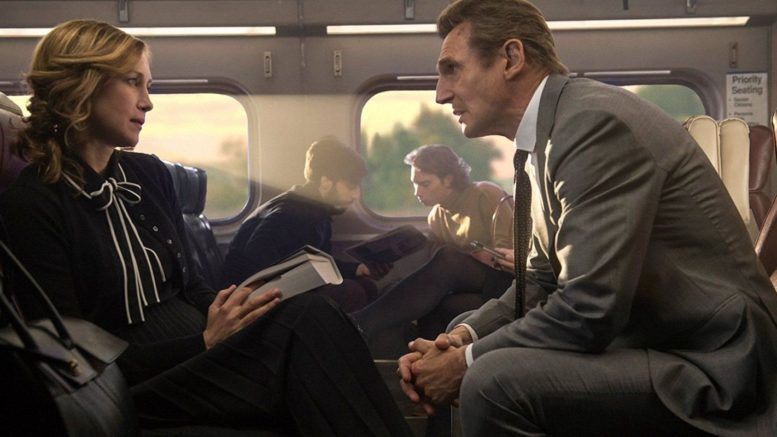 The Commuter (15) is the fourth collaboration between Director Jaume Collet-Serra and Liam Neeson (Run All Night, Non-Stop, Unknown) and this time we follow Michael (Neeson) as he is offered $100,000 to complete a simple task aboard a packed train. Now he finds himself caught up in a criminal conspiracy that not only endangers his own life but also the lives of his family and his fellow commuters.

This is your typical Liam Neeson movie so if you’re a fan of the Irish action hero then you will find enjoyment with this flick. His performance was the usual grizzled tough-guy act he has become accustomed with, but he does it really well and despite being over 60, he can still throw down with the best of them.

There are a number of fun actions scenes, one of which could be Neeson’s best ever fight scene. Fans of the actor will notice that a lot of films tend to use quick cuts and shaky-cam to film his brawls. The Commuter switches it up and adopts the same technique that has been seen in the Kingsman films, where the camera spins around, zooms in and out in order to make it look like one shot and while it can be jarring for some people, I really enjoyed it.

I liked the set-up for the film as it painted Neeson as just an average man who needs to support, and eventually save, his family instead of a guy with a particular set of skills. There were a number of surprising moments of tension and the “who done it” story makes for some edge-of-your-seat thrills that were very entertaining.

Neeson carries the film, as was expected, but when you have several great actors at your disposal (Vera Farmiga, Patrick Wilson, Sam Neill) and barely use them, they just feel like a wasted opportunity which could have added some character variety.

In some parts of the movie you will need to have a bit of an imagination as several moments involving how the “bad guys” are controlling Neeson’s movements and decisions etc are quite hard to believe. Also, the ending/big reveal, which I will not spoil, was also rather predictable and there was no real explanation of why they did what they did.

There is a particular action sequence that goes on way too long, making you really notice how bad the CGI was in that scene. There is also some insanely cheesy dialogue that just made me laugh when actually they were probably going for serious or tense and some of the characters are very clichéd.

Overall, The Commuter is exactly what you expect from a Liam Neeson movie and if you want to just sit back and enjoy a fun action-thriller then you’ll have a good time with this movie. If you want a little bit more depth and character development etc then you may be disappointed.

If you’ve seen the trailer you know what type of film you’re in for so just enjoy it.